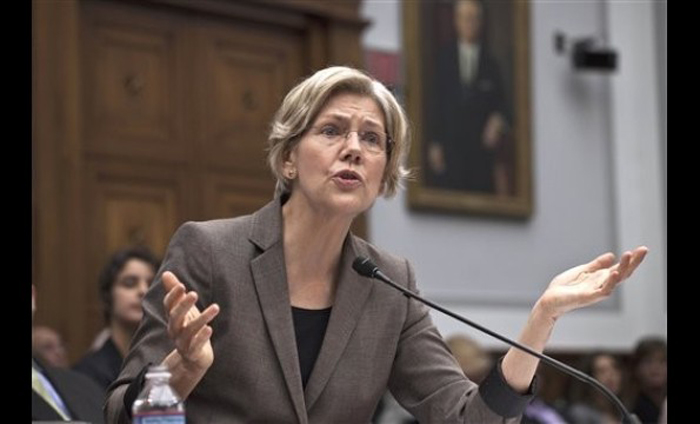 She’s the first senior administration official to publicly question the thoroughness of the investigations led by the Justice Department, the Department of Housing and Urban Development, the Treasury Department, Federal Trade Commission, all 50 state attorneys general and more than 30 state bank regulators.

WASHINGTON — A top Obama administration official on Thursday questioned the scope of the state and federal investigations into alleged mortgage abuses and “illegal” foreclosures perpetrated by the nation’s largest mortgage companies, marking the first time a senior White House official publicly broke ranks with the administration over the issue and raising fresh questions about the wisdom of the government’s rush to settle with the firms.

Elizabeth Warren, a senior adviser to President Barack Obama and Treasury Secretary Timothy Geithner, told a congressional panel that government agencies may not have sufficiently investigated claims that borrowers’ homes were illegally seized by banks such as JPMorgan Chase, Bank of America, Wells Fargo, Citigroup and Ally Financial.

“I think there’s a real question about whether there’s been adequate investigation,” said Warren, the temporary custodian of the Bureau of Consumer Financial Protection, a new federal agency charged with protecting borrowers from abusive lenders. Her statement came in response to questions from Rep. Trey Gowdy (R-S.C.), a former federal prosecutor who asked Warren why her agency needed to oversee such abuses when the U.S. Department of Justice is already probing such matters.

Warren, a passionate consumer advocate, has long questioned whether the state and federal probes have been comprehensive, according to people familiar with her views. The investigations were launched last year amid news reports that the lenders were at times improperly repossessing borrowers’ homes and breaking state laws and federal rules in the process.

But she had not publicly shared that view, which is widely spread among individuals with direct knowledge of the probes, until the Thursday appearance before the House Oversight and Government Reform Committee.

She’s the first senior administration official to publicly question the thoroughness of the investigations led by the Justice Department, the Department of Housing and Urban Development, the Treasury Department, Federal Trade Commission, all 50 state attorneys general and more than 30 state bank regulators.

The nation’s five largest mortgage firms have saved more than $20 billion since the housing crisis began in 2007 by taking shortcuts in processing troubled borrowers’ home loans, according to a confidential presentation prepared for state attorneys general by Warren’s agency. That estimate suggests large banks have reaped tremendous benefits from under-serving distressed homeowners, a complaint frequent enough among borrowers that federal regulators have acknowledged the industry has fundamental shortcomings, including a penchant to abuse borrowers, and is in need of reform.

Warren’s claim lends further credence to the view that the various government agencies are being reckless by negotiating an agreement with the five banks — the largest mortgage servicers in the country — that would settle accusations they abused homeowners and broke various laws in exchange for penalties and mortgage relief for struggling borrowers that could reach up to $30 billion.

State and federal prosecutors are pressing to complete a proposed settlement with the five companies even though they’ve only initiated a limited investigation that hasn’t examined the full extent of the alleged wrongdoing, The Huffington Post reported Monday, citing interviews with more than two dozen officials and others familiar with the state and federal probes.

Representatives of Justice, HUD and Treasury all declined to comment.

Some officials, as well as others with experience sitting across the negotiating table with major banks, say the government is making a critical mistake that jeopardizes the public interest by seeking a deal before amassing a credible threat of successful prosecution by way of a comprehensive probe: In essence, they say, the government would give servicers a blanket pass for widespread alleged acts of fraud and extract too little in return, all while operating from a relative position of weakness.

Though those working towards a quick settlement say the eventual agreement with the banks will only cover mortgage servicing deficiencies that harmed borrowers and foreclosure abuses like so-called “robo-signing,” many fear that the fines will be extracted in return for a broad release from mortgage-related liability.

The banks are willing to pay higher fines in return for a comprehensive release from such claims, people involved in the talks said.

“It’s got to be done right. We’re not going to do it and be subject to double and triple jeopardy,” said Jamie Dimon, the chief executive of JPMorgan Chase, the second-largest U.S. bank by assets, about a proposed settlement agreement with state attorneys general during a conference call Thursday with analysts. “We’d rather litigate it.”

Eric Schneiderman, New York’s attorney general, is probing whether mortgages bundled into securities were done in accordance with state laws, people familiar with the probe said. He’s also pursuing a variety of investigations to determine whether Wall Street firms cheated investors when selling them these securities, sources said.

Schneiderman doesn’t want a proposed settlement agreement to interfere with his ongoing investigations, people familiar with his views said.

People involved in the talks said they’re aware of his probes and would not construct a settlement agreement that would constrain his investigations.

The government’s desire to settle rather than conduct comprehensive probes is due to a variety of factors, people with direct knowledge of the ongoing talks said.

For one, the state legal officers are hindered by federal laws that restrict their ability to investigate national banks. Of the five companies being targeted, all but Ally are national banks.

These institutions are overseen by federal bank regulators, particularly the Federal Reserve and the Office of the Comptroller of the Currency.

The two bank watchdogs issued their own reports earlier this year, castigating the companies’ faulty mortgage practices, but have said they can’t share specifics for individual firms, supervisory reports or any underlying documentation that formed the basis of their findings, citing federal rules prohibiting their disclosure.

The federal bank regulators’ review examined just 2,800 loan files, or 0.1 percent of the nearly 2.9 million homes that received a foreclosure filing last year, according to calculations made using data from the OCC and RealtyTrac, a data provider. Only about 200 loans each were examined at banking behemoths JPMorgan, Bank of America, Citi and Wells, Julie L. Williams, the No. 2 official at the OCC and the agency’s chief counsel, told a House panel last week. Those four firms collectively service $5.7 trillion in home loans, or more than half of all outstanding residential mortgages, according to Inside Mortgage Finance.

Some regulators have criticized their review. With near-exclusive oversight authority, the Fed and OCC have access to the most sensitive bank documents, but they said they were prevented from sharing them.

Meanwhile, the state officials, who are charged with protecting their constituents, could push for expanded investigative powers, but they would likely face a hard slog in court.

The process of requesting documents prior to such action, known as pre-trial discovery, typically yields valuable information that can strengthen a prosecutor’s case.

But thanks to that Supreme Court’s decision and another from 2007 — Watters v. Wachovia, which determined that state officials lack the authority to regulate subsidiaries of national banks, based on a policy known as preemption — the state prosecutors as a group are reluctant to pick a fight in court with the banks.

It’s unclear whether they’d succeed. Also, their request for documentation would probably draw opposition from the OCC, people involved in the talks said. The OCC has intervened in several lawsuits launched by state officials in recent years on behalf of the banks it oversees.

Other factors include the state of the housing market and the states’ financial resources.

A thorough probe would likely take more than a year. Meanwhile, the housing market remains depressed as foreclosures continue to pile up, borrowers are falling behind at elevated rates and the so-called “shadow inventory” of distressed homes being kept off the market grows.

If the state and federal officials wish to use the settlement talks as a vehicle to prevent foreclosures by using levies on banks to reduce monthly mortgage payments for troubled borrowers, time is slipping, people familiar with the matter said. Home prices are sliding and won’t begin to improve until next year, forecasts show.

In addition, state officials are hobbled by their budgets.

States had a cumulative budget deficit of nearly $84 billion in the 2011 fiscal year, according to an April report by the National Conference of State Legislatures. That gap is expected to swell to $86 billion for the 2012 fiscal year.

Kamala Harris, California’s attorney general, recently announced that her office would be forced to curtail its housing-related probes due to budget cutbacks.

Despite those headwinds, government officials are poised to extract as much as $30 billion from the five mortgage companies for their alleged abuses.

Warren’s admission, which came in response to questions asking why her agency initially advised state and federal officials on mortgage issues, was overshadowed by an otherwise partisan and combative congressional hearing during which Republicans attacked the consumer advocate and longtime Harvard Law professor for trying to protect consumers from unscrupulous lenders.

Separately, Democrats and Republicans on the committee agreed to request documents from major mortgage firms regarding improper foreclosures of borrowers in the military. The requests weren’t subpoenas, though.