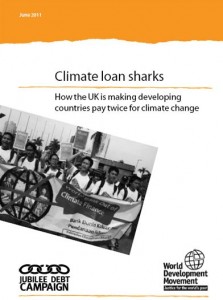 In Climate loan sharks, the World Development Movement and the Jubilee Debt Campaign reveal that the UK is pushing $1.1 billion of climate loans, via the World Bank, on some of the poorest countries in the world.

For example Grenada’s debt is already 90 per cent of GDP, yet it is to be lent a further $22 million, over 3 per cent of the country’s GDP. Lending to such debt burdened country is at best irresponsible and at worst willfully dangerous.

This entry was posted in CAPITALISM, COLONIALISM, ENVIRONMENT, GLOBALIZATION, GREED. Bookmark the permalink.