Posted on Wednesday, August 24, 2011 by meganwilson 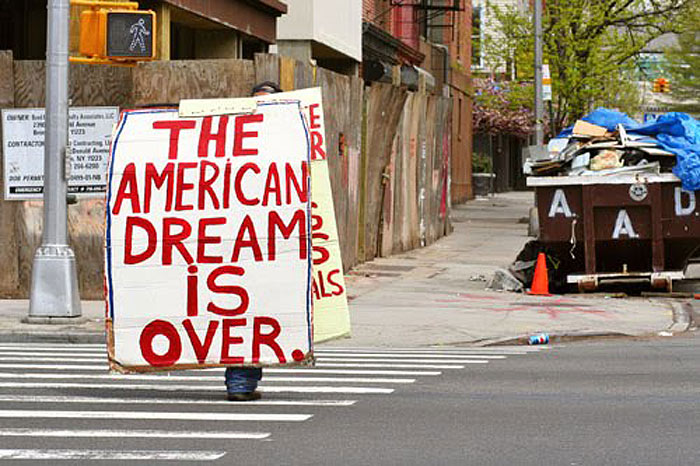 U.S. Corporations are looking to and investing in new markets outside of the United States. That doesn’t just mean they’ve moved the manufacturing outside of the U.S.; it means they no longer see the U.S. as the primary market they’re producing for. So when you read or hear the “hopeful” statistics of growth in the economy or the numbers are up in the stock market, what it really means, in large part, is that corporate executives and big shareholders are doing well because of U.S. corporate activity outside of the United States.

At the same time …

With companies continuing to get higher profits out of their employees, they may not have an incentive to hire more workers until the economy improves.

Companies are squeezing greater profits out of their employees, even as layoffs rise and the outlook for hiring and raises remains mixed, a recent study has found.

Profits per employee have gone up for the second year in a row, according to a study by the financial analysis company Sageworks, suggesting that companies continue to get more out of their employees as they slash their payrolls in an effort to get leaner. The findings also suggest that profits have been rising despite the lack of a corresponding increase in wages.

The rise in profits per employee indicates that companies are finding ways to maximize the efforts of their workers. Layoffs climbed to a 16-month high in July, according to an analysis by the firm Challenger, Gray & Christmas, and employers have eliminated 312,220 jobs so far this year.

Yet corporate profits were strong in 2010 and 2011, rising to a record $1.68 trillion by the fourth quarter of last year. That would indicate that it is largely shareholders, not workers, that are reaping the benefits of enhanced productivity, with surveys indicating that the increasingly efficient American workforce should expect next year’s raises to keep up with rising prices at best.

That rise in profits was made possible, in part, by employers doing more with less — asking more of their remaining employees even as payrolls shrank. But the result may be a workforce
that’s increasingly ill-equipped to meet the demands placed on it, as Mother Jones detailed in a recent story about overtaxed employees. The U.S. economy recovered in 2010 to an extent not seen in most other G7 countries, Mother Jones notes, but those gains didn’t translate into many benefits for the workforce: layoffs were greater in number, and re-hirings smaller, than in any other country.

On the other hand, the rising profits per employee figures could also bode ill for hiring, as Sageworks notes in its recent analysis. With companies continuing to get higher profits out of their employees, they may not have an incentive to hire more workers until the economy improves.

A survey publicized by the National Association of Business Economists last month found that 43 percent of the companies polled said they expected to increase their payrolls by the end of 2011. However, hiring expectations remain weak among small business owners, according to both the National Federation of Independent Businesses and a separate Gallup study published this month.

The Sageworks study compiles data provided by finance professionals, according to the Wall Street Journal. A call to Sageworks seeking more information about the methodology used to conduct the profits-per-employee study was not returned.