Posted on Tuesday, December 27, 2011 by cherylmeeker 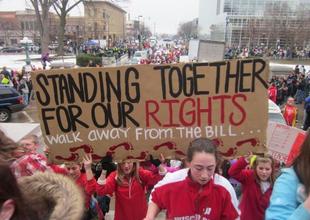 This year saw working people around the world begin to stand up and fight back. Ten organizers share their most inspiring moments from the U.S.’s year of action.

2011 will be remembered as the year the world woke up and began to fight back against a tiny minority that had held on to control—of money, of political power—for far too long.

Time Magazine named “The Protester” its person of the year, but the story is much deeper than that. Here in the US, the year began with despondency—a new class of Tea Party-supported legislators and governors were taking office around the country, and taking immediate steps to impose their anti-worker austerity agenda.

But the austerity class met resistance—first in Wisconsin, where Gov. Scott Walker moved to take away workers’ right to collective bargaining. The people in Wisconsin responded by occupying their Capitol building, kicking off a movement which spread through Ohio and Indiana, then seemed to subside before erupting in the fall with Occupy Wall Street.

But throughout the year, organizers were working around the country, fighting the power of Wall Street, big business, and the right-wing governors who do their bidding. We asked ten of them to talk about the moments that stood out for them this year, the moments that gave them hope. Some are moments you’ve heard of, some might have slipped past you. But all of them were signs of long-overdue change.

“For Wisconsin I think the big moment was when the 14 Democratic State Senators left the state [to avoid a vote on Walker’s collective bargaining bill]. I really think that’s what triggered the energy around the recall of the Senators, really triggered the energy around the recall of Walker. It changed from people taking to the streets because they didn’t know what to do to really having the energy to change something.

All these years when we’ve been begging Democrats to stand up, and here were 14 people who not only not caved but who put everything on the line to defend worker’s rights. It’s been a year of moments, really in Wisconsin, but that’s something that still inspires me a year later.

To me that was the lightning rod for everything.”

“On September 16th I was in a meeting for a couple of hours about how the progressive left can change the narrative from cuts to economic inequality. The next day, little did I realize while I was sleeping on cardboard at Liberty Plaza, the national narrative would change. Occupy Wall Street has changed the narrative for the millions all over the country who have been suffering for a very long time.”