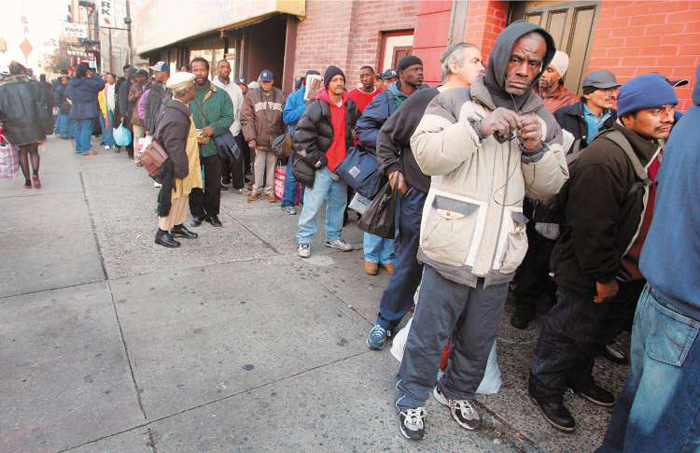 Social Security benefits would be reduced, and there are also cuts to Medicare and Medicaid. Students and the disabled would lose some federal government support

By George Zornick
The Nation

President Obama endorsed the Senate’s Gang of Six deficit reduction plan Tuesday, saying that the proposal “is broadly consistent with the approach that I’ve urged” and “makes sure that nobody is disproportionately hurt from us making progress on the debt and deficits.”

However, an examination of the plan’s specifics reveals that corporations and wealthy Americans won’t feel much pain at all—in many cases, just the opposite. The plan slashes taxes and could bring the top personal income rate down as low as 23 percent—meaning CEOs like Jamie Dimon and Lloyd Blankfein could see their after-tax income increase by as much as $3 million, according to Dean Baker, co-director of the Center for Economic and Policy Research. The corporate tax rate would be reduced from 35 percent to between 23 and 29 percent under the proposal. (Supposedly enough loopholes would be closed to keep total revenue from corporate taxes the same. Even in that scenario, corporations won’t pay an extra penny). Military spending also remains virtually untouched.

Meanwhile, the harm done to seniors, students, working families and others under the Gang of Six plan is unmistakable. Social Security benefits would be reduced, and there are also cuts to Medicare and Medicaid. Students and the disabled would lose some federal government support. Here’s a quick look at who would be most harmed under the new most popular proposal in Washington.

Seniors: Americans over age 65 get hit from several directions under the Gang of Six proposal. First, the plan reduces Social Security benefits by 0.3 percentage points per year by tinkering with the formula that adjusts benefits based on inflation. This could lead to annual reductions of over $1,300 for some seniors. Social Security is solvent through 2037 and does not contribute to the deficit, so this change is particularly misguided.

Medicare also would also face serious reductions. The plan directs the Senate Finance Committee to reduce doctor payments by $300 billion and then cut another $200 billion from the program overall. To achieve that, anything from raising the eligibility age to increasing cost-sharing could be considered and would almost have to be in order to find savings of that magnitude.

The poor: Medicaid will no doubt suffer under the Gang of Six plan, though it’s not possible to put a dollar amount on the cuts yet. The proposal says that the government must “spend healthcare dollars more efficiently in order to strengthen Medicare and Medicaid.” That’s obviously code for spending fewer dollars, which means Medicaid recipients can expect to receive less.

The cuts would be negotiated by another bipartisan group of senators over the next six months, but the starting point for Republicans on Medicaid is downright draconian. In the budget passed by House Republicans earlier this year, supported by a vast majority of Republicans when it came up for a vote in the Senate, the program would be cut by a whopping 35 percent by 2021—even as medical costs skyrocket between now and then. It’s not likely the GOP would win that steep of a reduction, but even halfway to that point would be catastrophic for Medicaid recipients. As none other than Sen. Kent Conrad, a key figure in the Gang of Six, told the Huffington Post in June, Medicaid operates on such low overhead that a cut “goes right to medical services.”

The disabled: The Gang of Six plan completely eliminates a disability insurance program created under the 2009 healthcare reform bill. The Community Living Assistance Services and Supports Act, or CLASS Act, provides in-home care for anyone who becomes disabled, as an alternative to being placed in a nursing home. It provides up to $18,250 annually for these costs, with no lifetime cap. Premiums are $5 per month for students or people under the poverty line, and about $123 per month for everyone else, but it’s also voluntary—anybody can ask their employer to simply opt out.

The elimination of the CLASS Act is another example of sacrificing a valuable program that simply does not contribute to the deficit but rather conflicts with conservative ideology. The Congressional Budget Office estimates the program actually saves the government $70 billion through 2019, because people have to pay premiums for five years in order to qualify for benefits. It also keeps people out of nursing homes, which are a major driver of increasing medical costs.

Students: The Gang of Six blueprint directs the Senate Committee on Health, Education, Labor and Pensions, which oversees federal student loan programs, to come up with $70 billion in budgetary savings. Given the somewhat limited scope of what the Committee oversees, in terms of areas that actually create federal expenditures, it’s virtually impossible it could find savings of that scale without serious changes to federal student loans.

One idea popular with the Bowles-Simpson debt commission, and echoed recently by Representative Eric Cantor, would be to end the Stafford student loan program, which subsidizes the interest on loans while students are enrolled in college. An outright elimination of the program would save the government $40 billion over ten years, but would force students to pay interest on their college loans while still in school and likely not drawing much of an income, if any.

Pell Grants, which are federal scholarships for low-income students, are also likely to be on the chopping block. The program is already running an $11 billion deficit, and will no doubt be a juicy target for Senators looking to get $70 billion in cuts.

These are the areas currently identifiable based on the Gang of Six blueprint—but it calls for massive, yet-unspecified spending reductions, and possibly discretionary spending caps down the road. Given the current slant towards reductions for needy Americans in the blueprint, it’s hard to imagine future reductions will be any different.

This entry was posted in CAPITALISM, ECONOMY, GOVERNMENT, GREED, POLICY, RESOURCES, Tax cuts for the rich. Bookmark the permalink.