Posted on Thursday, December 22, 2011 by meganwilson 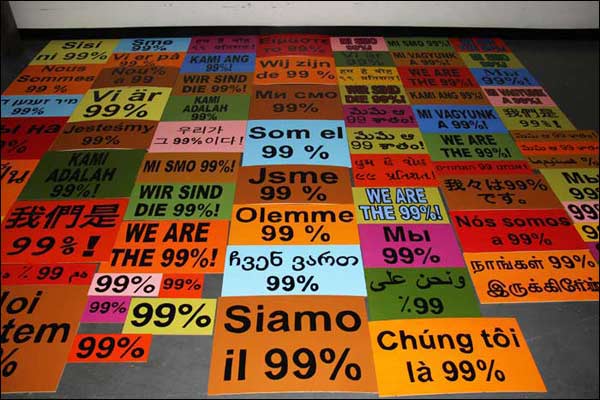 The signs all have bold black text on a color background painted on ¼” plywood in varying sizes. These are being distributed initially in San Francisco and Oakland to:

1. OccupySF and Occupy Oakland participants to be used at marches and protests – participants will be asked to display the signs in their home windows and/or tents when not in use.
2. Folks who might not have time to participate in the actual occupation, but want to lend support – to place in their windows in solidarity of the movement.
3. Small businesses to place in their windows in support and solidarity of the movement.

I am working to raise the funds to employ assistants (artists/sign painters who are currently unemployed) at $20/hour (a livable wage in the Bay Area) to help create and distribute the signs.

If the project is successful in the Bay Area, I will work to expand it to additional cities around the county and ultimately around the globe.

Until our voices are heard, the call for revolution will grow louder!
WE ARE THE ARTISTS OF THE 99%

This entry was posted in art, ARTISTS/ACTIONS, OCCUPY ALL STREETS!, OCCUPY OAKLAND!, OCCUPY SF, OCCUPY!, WE ARE THE 99%. Bookmark the permalink.