The End of Capitalism and the Wellsprings of Radical Hope 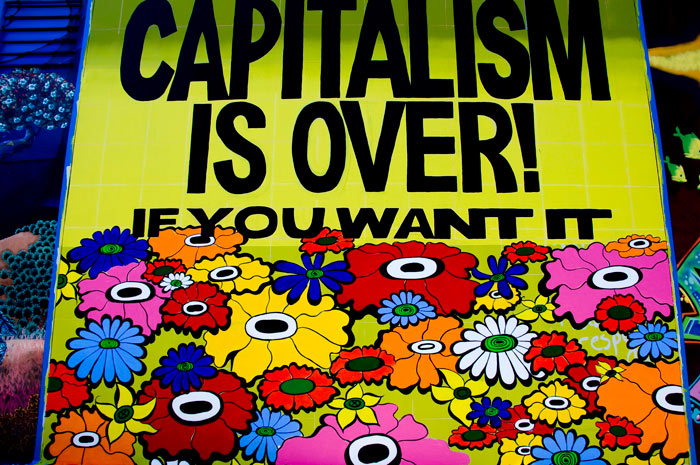 By Eugene McCarraher
The Nation

Why should we want to reinvent capitalism? Rather than reinvent it, we should remind ourselves why capitalism is so pernicious. We could start by stating the obvious (which, apparently, needs restating): the nature and logic of capitalism are incorrigibly avaricious. As a property system driven by the need to maximize profit and production, capitalism is a giant, ever-whirling vortex of accumulation. Anything but conservative, it’s the most dynamic and protean economy in history. As Marx observed in the opening pages of The Communist Manifesto, capitalism thrives on constant reinvention: “The bourgeoisie cannot exist without constantly revolutionizing the instruments of production, and thereby the relations of production, and with them the whole relations of society.” Always seeking new ways to make money, capitalists have reinvented the system several times already. Enclosures, factories, Fordism, automation and “flexible production”—metamorphosis for the sake of profit is the only constant in capitalism. Each incarnation has featured new brands of exploitation and corruption, designed and packaged by masters of economic and managerial sophistry.

To be sure, reformers have been partially successful at shaping these reinventions: collective bargaining, regulations of business, the welfare state. Whatever victories for justice working people have won have been hard-fought and tenuous, the fruit of protracted struggle. But however ingenious or effective the reforms, they’ve been limited, if not eventually subverted, by the intractably mercenary nature of capitalism. As we can see from the history of the past forty years—an era that has been marked by a transatlantic assault on social democracy and New Deal/Great Society liberalism—the rage to accumulate remains the predatory heart and soul of capitalism. We have good reason to assume that capitalists will always seek and find fresh ways to cast off the fetters and vanquish their opponents.

But the iniquity of capitalism goes deeper than its injustice as a political economy, its amoral ingenuity in technical prowess or its rapacious relationship to the natural world. However lissome its face or benign its manner, capitalism compels us to be greedy, callous and petty. It takes what the Greeks called pleonexia—an endless hunger for more and more—and transforms it from a tawdry and dangerous vice into the central virtue of the system. The sanctity of “growth” in capitalist culture stems from this moral alchemy, as does the elevation of market competition into a model of human affairs.

Conscripting us into an economic war, capitalism turns us into soldiers of fortune, steeled against casualties and collateral damage, ransacking the earth to fill the shelves and banks with plunder. Capitalism stands condemned most profoundly not by its maldistribution of wealth or its ecological despoliation but by its systematic cultivation of people inclined toward injustice and predation. And I think we on the left need to start dismissing as utterly irrelevant the standard apologetic riposte: the material prosperity and technological achievement generated by capitalist enterprise. No amount of goods can compensate for the damage wrought on human nature by the deliberate nurturance of our vilest qualities. The desecration of the values we claim to hold most dear is the primary reason we should want to abolish, not reinvent, capitalism.

This suggests that what needs reinvention is not capitalism—leave that to the well-mannered barbarians in the business schools—but our moral and spiritual imagination. I don’t mean only the wisdom that lies in the venerable traditions of the left. Even those who have opposed capitalism have often fallen for its illusions: the ideal of “growth,” the mythology of “progress,” the cipher of “innovation.”

Any effort to end the tyranny of Mammon must be leavened by other concerns. What does it mean to be human? What do we really want? These are moral, even religious questions—the kind of questions we often dismiss as politically unserious, or relegate to the hallowed oblivion of “private life.” But they’re also political questions, for the answers determine the ends as well as the means of production. The ancient moral and metaphysical concerns may turn out to be not redoubts for reaction but wellsprings of radical hope.

Read the first proposal in the “Reimagining Capitalism” series, “The Rise of Benefit Corporations,” by Jamie Raskin.