SOLUTIONS: Why Taxing the Rich Is Good for America

Posted on Wednesday, August 24, 2011 by meganwilson 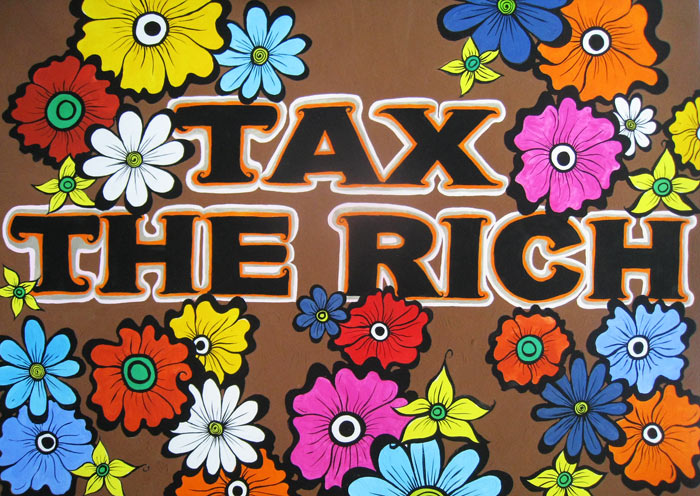 We could never post enough articles on this topic …

Last week, Warren Buffett wrote an incredible opinion piece in The New York Times asking the federal government to raise taxes on the wealthiest Americans, himself included. “My friends and I have been coddled long enough by a billionaire-friendly Congress,” he argued. “It’s time for our government to get serious about shared sacrifice.”

Buffett’s editorial sent economists and politicians into a frenzy as they debated the merits and implications of his request. Underlying the chatter is an important question: Does our country benefit, financially, from taxing our wealthiest citizens?

According to Bruce Bartlett, who’s held senior policy roles in both Ronald Reagan’s and George H. W. Bush’s administrations, as well as on the staffs of Reps. Ron Paul and Jack Kemp, “in 2008, those in the top 1 percent of the income distribution, with incomes over $380,000, had an effective tax rate of 23.3 percent. In 1986, a year when the real gross domestic product grew a healthy 3.5 percent, their effective tax rate was 33.1 percent. It has been much lower every year since.”

Bartlett, who culled Internal Revenue Service data for his analysis, which appears this week in his New York Times column, goes on to say: “If this group were still paying 33.1 percent, federal revenue would have been more than $166 billion higher in 2008 alone. That would be enough to reduce the budget deficit by about 10 percent this year. If the top 1 percent of taxpayers had continued to pay the same effective tax rate they paid in 1986 every year from 1987 to 2008, the federal debt today would be $1.7 trillion lower.”

While Bartlett acknowledges the assumptions implicit in his calculations, the bottom line is clear. America has lost boatloads of money thanks to our willingness to cut taxes on those who can most easily afford to pay them. This despite our country’s history of successfully taxing the rich. Under Reagan, for example, the richest 1% of Americans paid one-third of their income to the federal government.

Those who argue against higher taxes often fear that an increase will slow economic growth. But history dispels that myth. As William G. Gale, an expert on tax policy at the nonpartisan Brookings Institution, wrote on CNN.com, “Even the massive tax increases during and after World War II — amounting to a permanent rise of 10% to 15% of gross domestic product — and the much smaller tax increases in 1990 and 1993 did no discernible damage to U.S. economic growth.”

The debate over whether and how much to tax the rich isn’t new. But it’s extremely important in the current economy. The debt ceiling deal reached earlier this month includes spending cuts, but does nothing to increase revenues. Additionally, the spending cuts come primarily from programs that support low- and middle-income households. The richest Americans? They’re virtually exempt from chipping in to resolve the nation’s budget problems.

Which is why Buffett is publicly asking to pay more in taxes — and why he’s right. After all, “households in the top 1% of the distribution can afford to contribute,” argues Gale. “They have done enormously well during the past 30-plus years. In 1979, their income accounted for 10% of total income. According to the most recent data (from 2008), their share of total household income more than doubled to 21%. In contrast, real income for middle-class workers has remained roughly constant over the same time frame.”

In his opinion piece, Gale outlines a variety of options for raising taxes. In all cases, he’s advocating for moderation. “None of this means that the U.S. needs to move to European taxation levels,” he writes. “But between the depleted tax revenues we raise now — the lowest share of the economy in six decades — and the high taxes experienced in European countries, there is plenty of room to raise revenues in an economically sound manner to support a reasonable level of government.”

Or, to put it more bluntly, our country is in the throes of a debt crisis. We’re delusional to think that we can continue with the current tax rates. So let’s stop asking whether or not we should raise taxes on the rich and instead turn our attention to how we can most effectively do so.

This entry was posted in CAPITALISM, SOLUTIONS, TAX THE RICH. Bookmark the permalink.