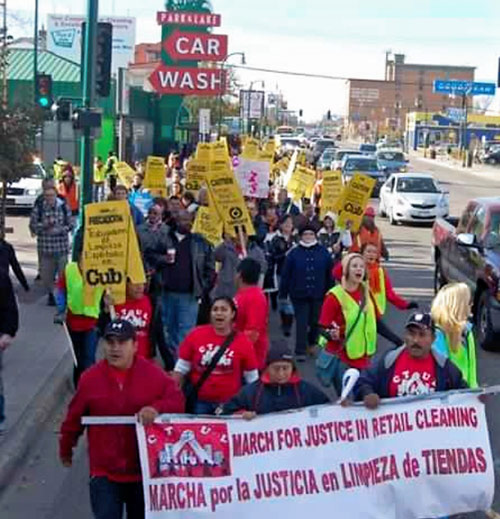 All night long, Jose Garcia performs his job while surrounded by food — a painful bit of irony, he says.

The 52-year-old Mexican immigrant works the overnight shift cleaning floors inside a Cub Foods store in Minneapolis, Minn., a job he’s mostly appreciated for the nine years he’s held it down. But lately, waxing aisle after aisle filled with groceries has simply reminded him of how little he has.

Despite his long tenure with the same cleaning company, Garcia says he earns a wage of $9 an hour — more or less the same rate he was making when he started cleaning floors back in 2002. Taking inflation into account, his salary has effectively gone down since he started working on the cleaning crew.

There are times when he can’t afford as much food as he’d like. He says it pains him to see workers at the store throw out unsold perishables like roasted chicken at the end of the night.

“It’s perfectly good food,” Garcia says through a translator. In the past, when he’s asked if he can take the food home, he says he’s been told that under-the-table giveaways are against store rules.

Sometimes he resorts to visiting the charitable food pantries around town. The irony there doesn’t escape him, either: Grocery stores like the one where he works often donate the very food that goes to those pantries and, eventually, to the needy like himself.

Like a lot of the workers who clean retail and food stores these days, Garcia doesn’t work directly for the store he cleans. He’s employed by a company called Carlson Building Maintenance, which has a contract to wax and buff the floors inside Cub Foods stores, a chain concentrated in Minnesota. Cub is owned by Supervalu, a grocery conglomerate that also has Acme, Albertsons and Shoppers among its many holdings.

Although they had once been decent-paying union jobs, a lot of the cleaning and other grunt work in grocery and retail stores now gets farmed out to third-party contractors like Carlson. Sometimes there are even sub-contractors beneath the contractors. If these companies can’t get the job done at a certain price point, the retailer will simply find another company that will. The system puts downward wage pressures on bottom-rung workers like Garcia.

If someone can work at the same job for roughly a decade and not see a raise, Garcia wonders, then what kind of promise does American employment actually hold?

“I started out working thinking I would make more money at some point,” says Garcia. “As the years have gone by, instead of things getting better, things have gotten worse.”

Despite the stagnant pay, he says his workload has managed to increase. Whereas three workers used to clean the floors of a store, Garcia says two workers are now expected to complete the same task. He says he often has to work through breaks to get the job done. Although he has no children, Garcia says he has a mother and a wheelchair-bound sister to look after back in Mexico, where he tries to send $300 or $400 each month. He declined to say whether he’s documented to work here.

Feeling desperate, Garcia and a former coworker are now in the midst of a hunger strike, posting up at an encampment in Minneapolis to bring attention to their plight. The goal of organizers and local clergy is to bring Cub Foods management to the bargaining table to negotiate pay.

Veronica Mendez, one of the organizers, said most grocery-store cleaners in the area are earning around $7.50 or $8 an hour and doing more work than they did just a few years ago.

“The reason is, these big stores are pitting the cleaning services against one another to get the lowest cost,” Mendez said. “The cleaning workers at those stores are the ones who pay.” With other cleaning jobs that have several layers of sub-contracting, “there are workers who end up not getting paid at all. … Retail cleaning is in a downward spiral, and it’s going from bad to worse.”

The Minneapolis City Council has taken notice of the workers’ plight. It passed a resolution on Friday saying that “retail cleaning workers have seen good-paying jobs of ten to eleven dollars per hour deteriorate into jobs barely paying minimum wage over the last ten years.”

Even though the workers are actually employed by Carlson, they tend to blame Cub Foods and Supervalu for the squeeze they feel.

But the folks at Supervalu say the workers’ beef is with Carlson, not them.

“The people who clean the floors are employed by an outside company,” said Mike Siemienas, a Supervalu spokesman. “We ensure that the company we contract with follows all laws. Other retailers in the Twin Cities area use third-party floor-cleaning companies. It’s a very common practice.”

Siemienas referred any question on workers’ wages to Carlson.

Amy Rotenberg, a spokeswoman for Carlson, says the company offers fair and competitive wages, given the current job-market woes.

“This is a very challenging economy and a very tight market, and these are entry-level, unskilled jobs,” Rotenberg says. “And, frankly, if we want to get into a discussion of what’s a living wage, that’s for Congress to decide and not us as private businesses.” Rotenberg says the company has managed to avoid laying off workers despite the recession and slow economic recovery.

“We don’t have enough money to put food on the table,” Torres says. “The situation is getting worse.” He has two daughters back home in Mexico but he’s no longer sure if he can afford to get them good educations.

Garcia isn’t sure if there’s any other work he can do. He doesn’t speak much English, and he doesn’t have qualifications for much beyond manual labor. Besides, the jobs that have been added during a sluggish recovery have tended to be lower-paying retail jobs anyway — the kind of gig that Garcia no longer believes can go anywhere.

A report released earlier this year by the National Employment Law Project found that lower-wage industries accounted for half of the job growth during the first year of the post-recession rebound. “For those seeking to move up in the labor market,” the report noted, “the current distribution of job opportunities has deteriorated.”

The situation has Garcia wondering if maybe he should retreat home, where he’d at least be able to spend time with his family.

“I’m considering going back to Mexico next year,” says Garcia. “I’m older now. There aren’t that many opportunities for me anymore.”

This entry was posted in CAPITALISM, EMPLOYMENT, FOOD, PROTESTS, SOLUTIONS. Bookmark the permalink.