Posted on Tuesday, September 27, 2011 by meganwilson 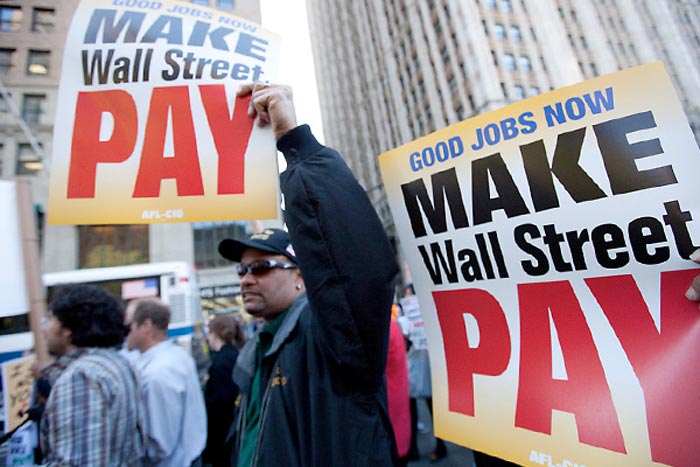 The goal of the coalition is to shift the debate of the economic crisis around whether the budget crisis should be solved with spending cuts or new revenue, to a debate about who should pay to solve the crisis- students and workers, or Wall Street.

A week of escalating actions throughout the week, including a bank divestment action, and a “clean-up” action, are being planned for Monday Sept. 26 – Thursday Sept. 29th, targeting Wells Fargo, Bank of American, and possibly Chase Bank and concluding with a march on SF’s financial district on Thursday the 29th.

The main message/demand is: “Big banks crashed our economy and destroyed our communities. Budget cuts threaten our schools, libraries, and social services. We bailed out the banks. Now they need to pay.”

It is important for us to remember that Bank of America, Wells Fargo, and other banks broke no laws in not paying any taxes this year. They didn’t have to because their lobbyists helped to write the tax laws.

Large corporations like Bank of America are incapable of making the kind of pledge our nation’s founders made to each other at the end of their declaration. By law they must put the economic interest of their shareholders above everything else.

Corporations like Bank of America must be put in their place. This begins by insisting that if corporations want to be afforded the same rights as citizens, they must take on the same responsibilities of citizens.

It is time for Banks and corporations to pay their fair share of taxes and to stop purchasing special privileges and entitlements that are not available to flesh-and-blood citizens.