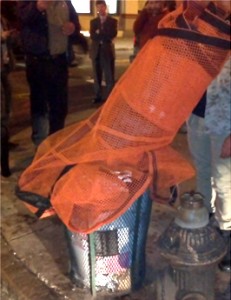 Cannes, France: I can sense very clearly here at Cannes that this is the moment “the masses” start shaping the policy response to the global financial crisis.

Why? Because everybody I speak to, interview or discuss background with keeps dropping the words “Occupy Wall Street” into the conversation. In fact if #OWS were a global brand, like the designer apparel shops that line the Rue d’Antibes here, it would have a profile to die for among the super-elite.

#OWS has, in just a few weeks, become global shorthand among policymakers for “what can happen” if they don’t regain control of the situation. Once you get a coalition of perfectly ordinary people saying “we’ve had enough”, and then you have to watch as the cops baton and taser them in the name of the trespass laws, you know you are in a reputational crisis.

Angel Gurria, boss of the OECD, who I’ve just interviewed, is not the first to say “they have a point”. There needs to be a social aspect to the anti-crisis response: something to stimulate growth and give hope to a generation that have had their future cancelled: that is pretty much accepted among every one of the G20 nations that is a democracy.

But to turn the corner, so that structural reform does not just come as a message about lower wages, fewer employment rights etc, you have to get over the fiscal crisis stage. And the problem is we are not over it.

The Greek fiasco – and it really is a fiasco: I’ve met senior policymakers who have no idea why George Papandreou did this, or why the timing, or where it ends – is a reminder of how quickly things can spiral out of control.