Posted on Saturday, October 29, 2011 by cherylmeeker

The reason protesters went out is that they had enough of the world where recycling your Coke cans, giving a couple of dollars to charity, or buying a cappuccino where 1% goes towards developing world troubles, is enough to make them feel good. After outsourcing work and torture, after the marriage agencies started to outsource even our dating, they saw that for a long time they were also allowing their political engagements to be outsourced – and they want them back. 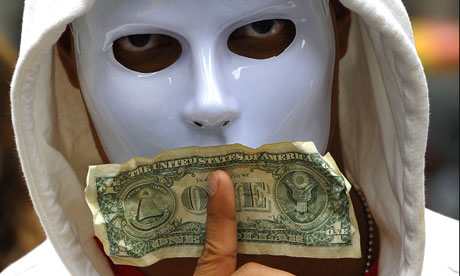 Critics say the Occupy cause is nebulous. Protesters will need to address what comes next – but beware a debate on enemy turf.

‘The protesters should fall in love with hard and patient work – they are the beginning, not the end.’

What to do after the occupations of Wall Street and beyond – the protests that started far away, reached the centre and are now, reinforced, rolling back around the world? One of the great dangers the protesters face is that they will fall in love with themselves. In a San Francisco echo of the Wall Street occupation this week, a man addressed the crowd with an invitation to participate as if it was a happening in the hippy style of the 60s: “They are asking us what is our programme. We have no programme. We are here to have a good time.”

Carnivals come cheap – the true test of their worth is what remains the day after, how our normal daily life will be changed. The protesters should fall in love with hard and patient work – they are the beginning, not the end. Their basic message is: the taboo is broken; we do not live in the best possible world; we are allowed, obliged even, to think about alternatives.

In a kind of Hegelian triad, the western left has come full circle: after abandoning the so-called “class struggle essentialism” for the plurality of anti-racist, feminist, and other struggles, capitalism is now clearly re-emerging as the name of the problem. So the first lesson to be taken is: do not blame people and their attitudes. The problem is not corruption or greed, the problem is the system that pushes you to be corrupt. The solution is not “Main Street, not Wall Street”, but to change the system where Main Street cannot function without Wall Street.