Posted on Tuesday, November 8, 2011 by meganwilson 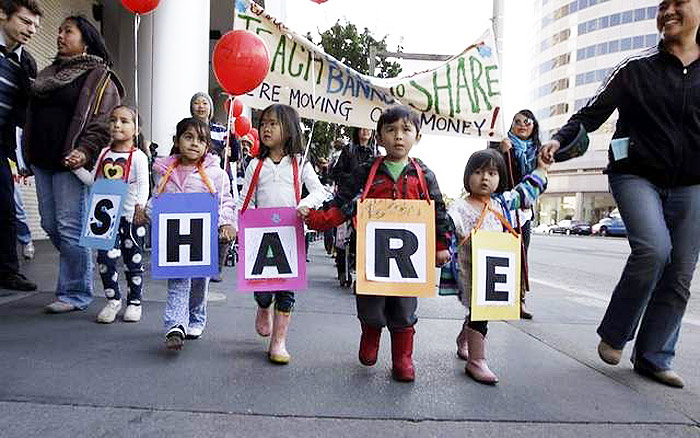 Angry that Wells Fargo took federal bailout money and is now posting record profits, a group of moms and their children rallied at an Oakland branch Friday and closed their accounts.

The “Colorful Mamas of the 99 Percent” tried to enter the bank, but the doors were shuttered soon after the protest began about noon at the branch on Franklin street.

The group of 40 marched from Snow Park nearby with about 10 strollers and kids in their arms and carried a banner that said: “Teach Big Banks to Share: We’re Moving Our Money.”

The first mom to close her account, Mimi Ho of Oakland, brought one of her two children into the bank strapped to her chest and was surrounded by television and newspaper photographers as she filled out the paperwork.

At least three moms closed their accounts before the bank locked its doors.

Wells Fargo, which took federal bailout money during the economic crisis, posted a profit of $15.18 billion for the 12 months ending in September, its highest number for any one-year period.

“I’m upset because the feds bailed out the banks and left the families behind,” Soto-Vigil said. “Two of my cousins lost their homes but the bankers haven’t lost their bonuses.”

The moms said they were closing their accounts because the bank should pay more taxes that eventually make it to social services that are being cut, like schools.

Prishni Murillo of Oakland brought her children to teach them that the principals of sharing should apply to big banks. She wants Wells Fargo to pay more taxes and contribute more to the community.

“Taxes go to schools and in Oakland we’re closing five schools and 25 are on the chopping block,” said Murillo. “We want to contribute the voices of moms of color and present to the public the people who are carrying the brunt of a failed economy, which is our children.”

He said in 2010 the bank donated $210 million to charitable organizations nationwide and has paid $30 billion in income taxes in the last 10 years.

Also in 2010, he said, the bank donated $20.7 million to nonprofits and schools in the Bay Area and gave $450,000 to public schools in Alameda and Contra Costa counties.

“People who are closing their accounts should ask the institutions they are going to how much they are giving to local schools,” Pulido said.

The group at Friday’s rally in Oakland supports both the Occupy Wall Street and Bank Transfer Day movements.

“With the kids, it shows the other side of the coin and that is if we don’t do something now about our economic situation, our kids are going to suffer,” Pooshs, said. “Things are going south in America and it’s time we find our voice and not be so complacent.”