Posted on Saturday, August 28, 2010 by meganwilson

While a lack of jobs is arguably the biggest problem facing the labor market, another major concern is the quality of the jobs that are being created. The Figure presents the five fastest growing occupations between 2006 and 2009 and shows that all but one of them pays below the median wage in May 2009 of $15.95 an hour.  The two fastest-growing occupations, home health care and food preparation and serving, pay closer to the federal minimum wage of $7.25 per hour than the median wage. A food preparation worker’s typical wage of $8.28 an hour would earn an annual salary of $16,560, based on a typical 2,000-hour work year: That salary is just below the 2009 poverty threshold for a family of three. Warehouse stock clerks, another fast-growing occupation, would earn slightly more than $20,000 per year. 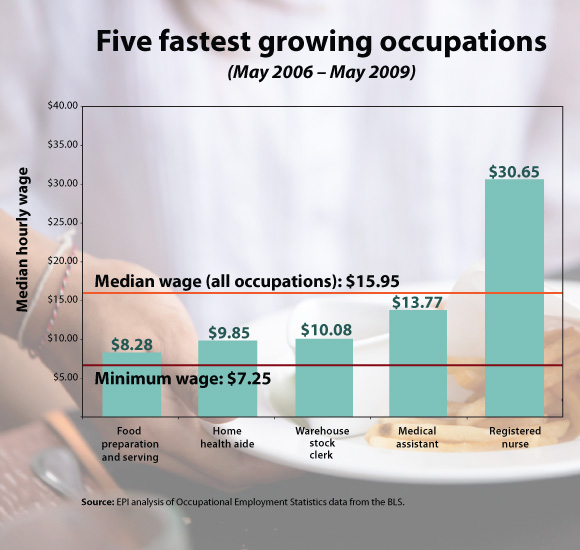 In addition, three of the five fastest growing occupations – home health aide, medical assistant and registered nurse — are in the health care industry. While registered nurses earn a median wage of more than $30 an hour, the disproportionate growth in health care jobs points to a lack of robust job growth across the labor market. The most recent jobs data show that every industry – with the exception of health care, education, and the government – has fewer jobs today than before the recession began, strong evidence that demand is weak across the entire economy.