Can We Stop the Charade and Just Cut To The Chase: THE U.S. IS HEADED FOR A DEPRESSION 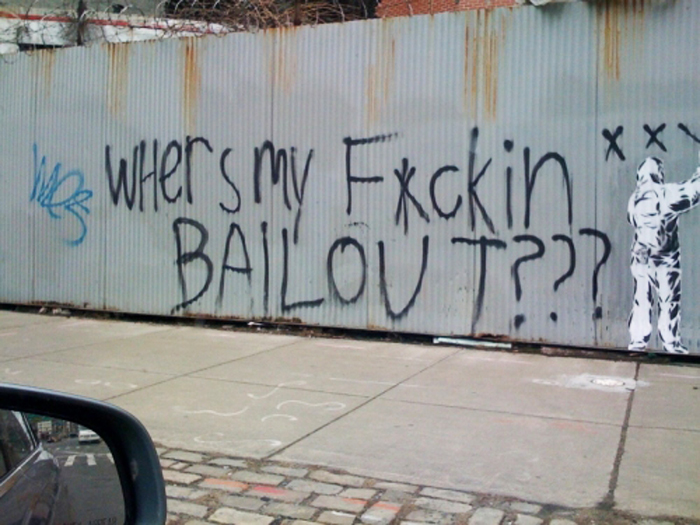 With a nod to Third Voice (for those who remember it) … but without the cool interface
CIO! = burgundy (a step up from red)

WASHINGTON — The U.S. economy grew at a meager 1 percent annual pace this spring, a slower rate than previously estimated. The downward revision will likely increase fears that the economy is at risk of another recession. (For the majority of Americans, that recession has never ended … anything worse than the current state, is a depression)

Fewer exports and weaker growth in business stockpiles led the Commerce Department to lower its estimate for the April-June quarter from its previous rate of 1.3 percent growth. That means the economy expanded only 0.7 percent in the first six months of the year.

Economists note that nine of the past 11 recessions since World War II have been preceded by a period of growth of 1 percent or less. (These must be the same economists who believe spending cuts, not tax increases are better … cuz if the rich just had more money, they’d be out there shopping and creating jobs … right?) The weaker growth could rattle an already edgy stock market, which has lost 12 percent of its value since July 21.  (nothing for the rich, but pretty scary if your retirement is tied up in stocks – if you even still have any retirement)

The report shows the economy was barely expanding even before this month’s stock market plunge. Economists worry that the Wall Street sell-off could cause consumers and businesses to pull back on spending and investment. (These must be the same economists who believe spending cuts, not tax increases are better … cuz if the rich just had more money, they’d be out there shopping and creating jobs … right?)

Stock futures fluctuated mildly after the report was released.

High gas and food prices have already eroded consumers’ buying power. (Can we also add in there housing expenses and healthcare costs …) Spending increased only 0.4 percent in the April-June period, the weakest growth since the final three months of 2009. The revision showed spending was a bit higher than the government’s first estimate of 0.1 percent growth. (and that just reflected the higher gas and food prices …)

People bought fewer long-lasting manufactured goods, such as autos and appliances. Those purchases fell 5.1 percent this spring, the biggest drop since the final three months of 2008. That partly reflects a shortage of autos on many dealer lots after the March 11 earthquake in Japan. Consumers spending accounts for 70 percent of growth. (Yeah …. probably just consumers waiting for Japan to stock back up … NOT … I think it largely reflects the higher gas, food, housing, and healthcare costs …)

Government spending contracted for the third straight quarter. And spending by state and local governments declined for the seventh time in eight quarters. (Not to worry though …  cuz soon those cuts will be paying off with less debt … right?)

Federal Reserve Chairman Ben Bernanke will deliver a highly-anticipated speech later Friday in Jackson Hole, Wyo. Investors hope he will signal that the Fed will launch a new effort to boost the economy, but analysts don’t expect anything ambitious. (For a great explanation of how this works – check THIS out – it features Ben Bernanke)

The central bank has already cut the benchmark short-term interest rate it controls to nearly zero, and last week pledged to keep it there until mid-2013. But so far lower interest rates haven’t helped: mortgage rates, for example, are already at record lows, and home sales are still falling. (This can be explained by the higher gas, food, and healthcare costs … matched with no or extremely low income that must be supplemented by blowing through the little savings or retirement that does exist)

Several dismal economic reports have suggested the economy worsened in the July-September quarter, sending the stock market lower. (nothing for the rich, but pretty scary if your retirement is tied up in stocks – if you even still have any retirement) Manufacturing in the mid-Atlantic region contracted in August by the most in more than two years, a survey by the Federal Reserve Bank of Philadelphia found. A Richmond Fed survey released Tuesday and a New York Fed survey last week also pointed to slowdowns in those areas, although not as severe.

There have been some positive signs. (I always love these … the positive signs … that will be amended later to reflect numbers lower than previously reported) The economy added 117,000 net jobs in July, twice the number added in each of the previous two months. Consumers spent more on retail goods last month than in any month since March. U.S. automakers rebounded last month to boost factory production by the most since the Japan crisis.

Most economists aren’t forecasting a recession. JPMorgan Chase projects the U.S. economy will grow only 0.9 percent this year and 1.7 percent in 2012, much lower than the bank’s estimates just a few weeks ago. Other economists have made similar downgrades. (they’re not forecasting a recession for the rich, but for the majority of Americans, the forecast is a depression … and please, WTF – that would be Where The Fuck, not What The Fuck – is JPMorgan Chase getting its information to predict that next year the economy will grow a whole percentage point more than this year … oh yeah, cuz the rich will have more money and they’ll be out there shopping and creating jobs … right?)