Posted on Wednesday, December 14, 2011 by cherylmeeker 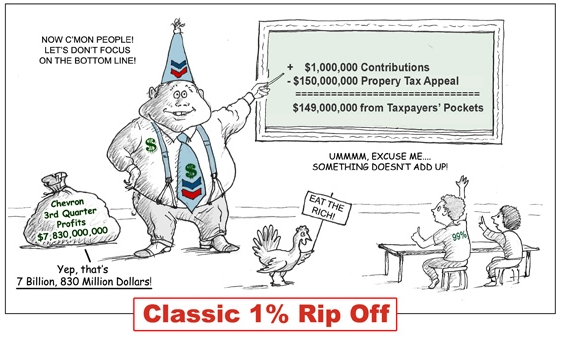 While times are hard and vast majority of us are feeling the squeeze, business is booming for oil multinationals. And it seems that companies will do anything to maximise their profits, even if tax payers bear the cost.

Oil giant Chevron is demanding a $150 million tax refund from Richmond City Council, California. News from our allies in the US confirms that public anger in Richmond, where Chevron has operated a refinery for almost a century, has sparked protests in the company’s home state and garnered further support for the global Occupy movement.As the Richmond Progressive Alliance reports:

The Chevron Corporation is currently appealing its property tax assessment and trying to get the county to pay them a refund of $150 million dollars at hearings in Martinez. If ordered to pay these refunds, County, City, and school districts would have to slash vital health, education and public services and lay off employees.

Chevron, which has long had reduced property taxes thanks to loop holes in Proposition 13, is able to hire an army of expensive lawyers to try to bully the county into accepting a settlement. Community groups, unions, and everyone who cares about justice say it is time to stop the 1% from bleeding the rest of us. We are the 99%, Chevron is the 1%!

Chevron’s PR campaign, which portrays itself as a “good neighbour” to the people of Richmond has also been heavily criticised. Chevron, like Shell and BP, uses sponsorship and donations to conceal its social and environmental impacts. Richmond City Council stressed the hypocrisy of Chevron’s PR:

Chevron’s charitable contributions to worthy local organizations in 2010 amounted to $3.7 million, which represents a mere 0.047% of the profit it made in just three months (July – September) in 2011.