Working Poor: Almost Half Of U.S. Households Live One Crisis From The Bread Line

Posted on Sunday, February 5, 2012 by meganwilson 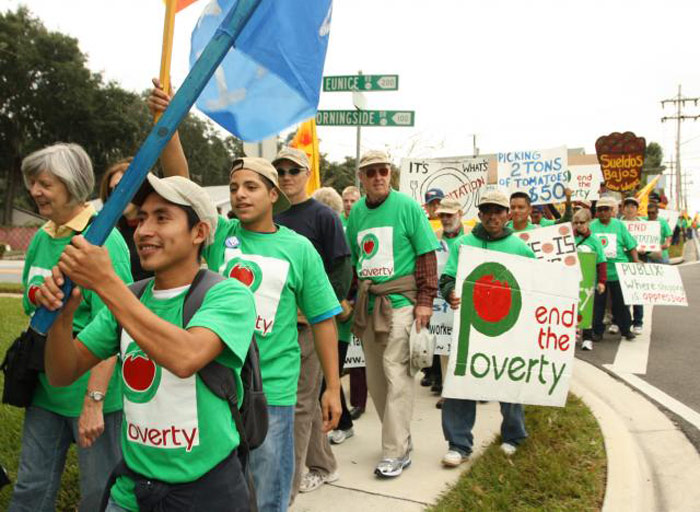 Don’t be fooled by the latest numbers released by the Labor Department reporting that unemployment has dropped to 8.3% due to a hiring surge … or the idea that the country’s problem is just a “crisis of confidence.” This is going to become real clear in the next several years as:

1. Folks who have gone back to school and racked up tens of thousands of dollars in student loan debt (in truth just to pay their basic bills) graduate and find themselves unemployed or way underemployed.

2. Folks who have been living off their credit cards, savings, and/or retirement run out of credit and money.

3. Prices for basic expenses such as housing, gas, food, and health care continue to go up.

WORKING POOR: ALMOST HALF OF U.S. HOUSEHOLDS LIVE ONE CRISIS FROM THE BREAD LINE
By Alexander Eichler
HUFFINGTON POST

What does it mean to be poor?

If it means living at or below the poverty line, then 15 percent of Americans — some 46 million people — qualify. But if it means living with a decent income and hardly any savings — so that one piece of bad luck, one major financial blow, could land you in serious, lasting trouble — then it’s a much larger number. In fact, it’s almost half the country.

“The resources that people have — they are using up those resources,” said Jennifer Brooks, director of state and local policy at the Corporation for Enterprise Development, a Washington, D.C., advocacy group. “They’re living off their savings. They’re at the end of their rope.”

The group issued a report today examining so-called liquid asset poverty households — the people who aren’t living below the poverty line, but don’t have enough money saved to weather a significant emergency.

According to the report, 43 percent of households in America — some 127.5 million people — are liquid-asset poor. If one of these households experiences a sudden loss of income, caused, for example, by a layoff or a medical emergency, it will fall below the poverty line within three months. People in these households simply don’t have enough cash to make it for very long in a crisis.

The findings underscore the struggles of many Americans during what has often seemed like an economic recovery in name only. While the Great Recession officially ended more than two years ago, unemployment remains high and wages have barely budged for most workers. For more people, whether they draw a paycheck or not, a life free of deprivation and financial anxiety seems perpetually out of reach.

That’s not to say that everyone who is liquid-asset poor spends all their time fretting. On the contrary, because many have regular paychecks coming in, they may not grasp the precariousness of their situation.

“They don’t necessarily realize how close people can be to one interruption to income or one interruption to health benefits,” said David Rothstein, the project director for asset building at the non-profit Policy Matters Ohio. “They’re one paycheck away from being in debt.”

Rothstein, who also serves on a steering committee at the Corporation for Enterprise Development, told The Huffington Post that payday lenders — who loan money to desperate borrowers at high interest rates, drawing people into hard-to-escape cycles of debt — are “a huge problem” in Ohio, as in many other states. People often turn to payday lenders to cover one-time, unexpected expenses, but can end up in a long and costly relationship.

“People say things like, it’s just one mechanical problem with their car,” said Rothstein. Before they know it, he said, “every other week, they’re back at the payday lending shop.”

The Corporation for Enterprise Development findings echo other recent studies showing that many Americans are ill-prepared for financial emergencies. Analysts said the reasons include flat wages, the high cost of medical treatment and the nationwide drop in housing values leaving homeowners with less wealth than they believed they had.

Andrea Levere, the president of Corporation for Enterprise Development, told HuffPost that greater financial literacy might have helped prevent the current situation.

People can “graduate high school and not know how to write a check,” Levere said, adding that an increased emphasis on personal responsibility for budgeting and spending should be an important part of any step forward.

At the same time, Corporation for Enterprise Development officials were quick to argue that public policy needs to address the scope of the problem. Levere cited the example of asset limits in public benefit programs, which restrict services like food assistance and public health insurance to households with few or no assets — a policy that critics say denies help to many people in need.

“In some cases,” said Levere, “it means they can’t even own a car that is in good enough shape to get them to work.”

Brooks agreed. “A family that loses its job, that was maybe solidly middle class, in a state where they have restrictive asset tests, is going to have to liquidate all their assets, all their savings for the future” in order to qualify for benefits.

The report maintains that there are a number of measures that could alleviate liquid asset poverty, from strengthening consumer protections against payday lenders to making greater assistance available to first-time homebuyers. Levere said even minor policy adjustments could have “revolutionary implications.”

“There’s a lot of ways forward. It doesn’t mean it’s not tough,” Levere said. “I’m a great believer in one step at a time.”