The US: Waking up to class politics 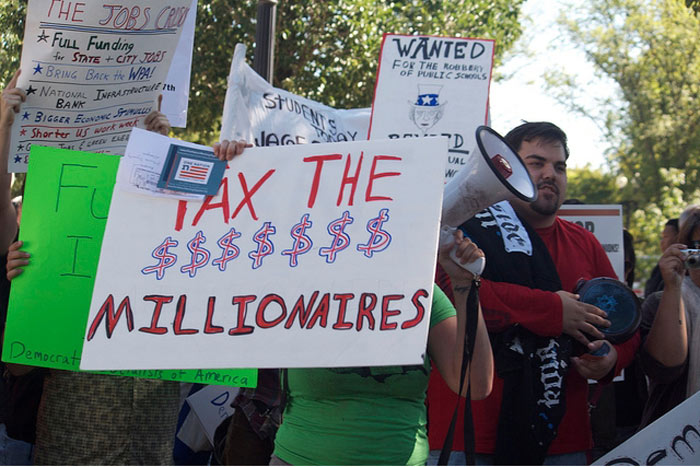 As a result of this stand-off being one of the top domestic news stories in the country, Americans are beginning to see that unions are not the enemy of the economy like conservative pundits and business titans argue, but instead a force for one of the most patriotic things of all: A decent living for the average family.

A popular item is going around in emails and Facebook pages among the people who are in solidarity with the workers protesting against anti-labour legislation in Wisconsin: A CEO, a union worker and a Tea Partier (a member of the emerging right-wing political movement) are at a table with 12 cookies. The CEO takes 11 and says to the Tea Partier: “Keep an eye on that union guy, he wants your cookie.”

Republican governor of Wisconsin Scott Walker’s proposal not only to have state workers contribute more of their pay to their health and retirement funds – which are above the standards in the private sector – but to take away their basic right to collectively bargain would lead to the eventual destruction of these labour organisations.

Other governors may attempt to do the same, and it appears that similar legislation in nearby Ohio will succeed.

A public-relations campaign bankrolled by business groups and billionaires like the arch-conservative Koch brothers is aimed nationwide at not only pinning the blame for state budget deficits on its hard-working employees and their union leaders, but to tap into the envy many private sector workers and the unemployed have toward civil servants who have decent benefits.

Like crabs in a bucket, the theory goes, lower-paid workers will want to pull their union counterparts down.

Since the Reagan administration, class politics in the US has waned; the Republican Party benefits from the fact that many lower-income citizens vote against their economic interests because they oppose the social liberalism of the Democratic Party.

Many vote against tax increases on the rich, because even if they themselves are not wealthy, there is a tiny chance they one day will be. There is also the prevailing mythology that the wealthy class earned their place and should not be punished.

If anything comes out of this showdown in the capital city of Madison – where thousands of workers have protested every day for weeks and Democratic politicians have stalled the bill by fleeing the state – it is the reemergence of old-school union tactics, such as a possible general strike in Wisconsin, and the fact that more and more Americans might sympathise.

Nationally, it looks as if the strategy to pit workers against each other may not be succeeding.

The New York Times reported on February 28 that its poll found that “a majority of Americans say they oppose efforts to weaken the collective bargaining rights of public employee unions and are also against cutting the pay or benefits of public workers to reduce state budget deficits.”

It continued: “Given a list of options to reduce the deficit, 40 per cent said they would increase taxes [and] 22 per cent chose decreasing the benefits of public employees.”

Walker, too, has been a unifying figure for workers, especially when he admitted last month to a prank caller pretending to be one of his benefactors that he contemplated planting “troublemakers” in the demonstrations. And to stay politically viable, Walker eventually excluded police officers and firefighters from the draconian legislation. But the harm was done.

When he called on cops to remove protesters from the Capital building, they refused to do so, standing in solidarity with the other workers. Both the governor and the young progressive activists in Madison, accustomed to thinking of the police as their adversaries, got a good lesson in labour politics.

It is also true that Wisconsin was not the best place for the right to start a new front in the class war.

Despite creating conservative politicians like Walker and, during the Cold War, the now disgraced anti-communist zealot Joe McCarthy, the state’s conservative population is matched by a progressive community unlike others in the country.

The state’s largest city, Milwaukee, has had three socialist mayors. The state’s capital, home to a feisty student activist movement at its large state university, is often called The People’s Republic of Madison. The state’s professional football team, the reigning national champions from the working class area of Green Bay, is a citizen-owned team, and many of its players have come out in support of public workers.

As a result of this stand-off being one of the top domestic news stories in the country, Americans are beginning to see that unions are not the enemy of the economy like conservative pundits and business titans argue, but instead a force for one of the most patriotic things of all: A decent living for the average family.

That is not to say that unions should always be immune from cutbacks in hard times. Unions can, and do, make such concessions when their management counterparts cut the fat at the top.

But Walker has no interest in raising taxes on the wealthy or bargaining in good faith. And like the proposals of other governors around the country – like Chris Christie of New Jersey, the super-star of the new anti-public-sector union movement – Walker’s will not actually relieve the state of its budget woes any time soon.

More Americans may be waking up to class politics. The question is, then, as the Republicans are ramping up their assault on union workers, how will labour leaders make use of this new political capital?

Ari Paul has written about labour for US publications including The Nation and The American Prospect. He also edits the Unionist, a monthly magazine for public sector workers in New York City.

This entry was posted in CAPITALISM, DEMOCRACY, GOVERNMENT, POLICY. Bookmark the permalink.