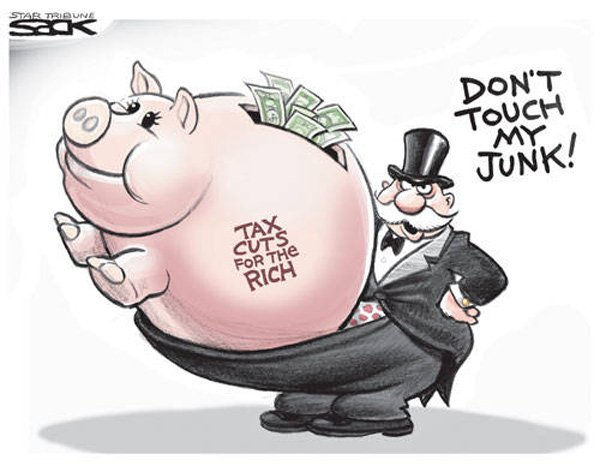 This is the time of year when we are most aware of our tax burdens. But what we may be less aware of are all the huge tax breaks built into our system. Most Americans benefit from one or more — but it’s the wealthy who benefit the most.

The government spends money through appropriations and writing checks, but it also showers individuals and companies with a astonishing array of special exemptions, credits and deductions that amount to a $1.1 trillion giveaway each year. (For comparison: the big budget fight that concluded last week cut spending by about $38 billion.)

About half of the money lost to “tax expenditures” comes from the 10 breaks listed below.

Few of the biggest breaks directly benefit corporate America. Most are widely distributed among the population and are meant to reward and encourage what is generally considered responsible behavior. Each break also represents a powerful, and in some cases broad-based, constituency.

But in stark contrast to, say, social programs, tax breaks vastly favor the rich over the middle class and the poor.

They vastly favor people who own homes (especially expensive homes), can put a lot away for their retirements, have generous health insurance plans and live in high-tax states. Even something as simple as the deduction for charitable donations favors the wealthy: Because they pay higher marginal tax rate, they get a bigger federal subsidy for each dollar they give. 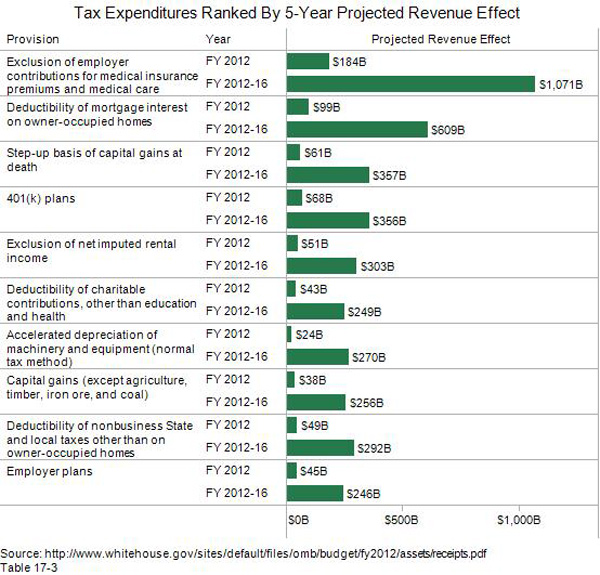 Some of these terms may require a little explanation:

1. Tax-free health insurance contributions. The tax exclusion for employer-provided health benefits is the single largest tax break — it alone will cost the government $1 trillion in foregone taxes over the next five fiscal years. This huge tax expenditure massively subsidizes the nation’s employer-based health insurance system. It also provides an incentive to employers to overspend in health benefits (which are tax free) and pay less in salary (from which, of course, the IRS takes a bite). This tax break only helps families with at least one member employed by an employer who offers them health benefits. Others have to buy health insurance with after-tax dollars.

2. The mortgage interest deduction. The second-largest tax break is essentially the nation’s largest housing program. By letting taxpayers who itemize deduct the interest they pay on their home mortgages, the government massively subsidizes home ownership. The more expensive the home — and the higher the homeowner’s tax bracket — the bigger that subsidy is.

3. Treatment of capital gains at death. When you die, the government forgives your capital gains tax on appreciated assets that you pass on to your heirs. In accounting terms, this is the “step up in basis” on death. From the heirs’ perspective, it means that the “basis” going forward (the amount above which anything is considered taxable capital gains) is the value of the asset at the time they received it. So if you buy stock at $1,000 and it’s worth $10,000 when you die, your heir gets $10,000 as the basis. No one ever pays taxes on the $9,000 in appreciation. Now imagine a multi-million-dollar stock portfolio and multi-million-dollar homes — and you’re talking real money.

4. Tax-free contributions to 401(k)s. Federal government policy encourages savings for retirement by allowing employees and employers to make tax-free contributions to retirement plans, the most common of which is the 401(k). This break is a big gift to the financial securities industry, which is where most of this money goes, and to the very wealthy. Indeed, the bulk of benefits go to high-income households, while little goes to the lower and moderate income households. There are limits to how much can be contributed tax-free, but the amount of tax foregone through contributions to 401(k) plans, along with employer plans, when combined still make tax-deferred retirement savings the second largest tax expenditure.

5. Exclusion of net imputed rental income. Homeowners don’t pay themselves rent. If they didn’t own their own homes, they would pay rent — and whoever received that rent would have to declare it as income and pay taxes on it. But this “imputed rental income” goes untaxed — another major subsidy to homeowners. The foregone rent is called “imputed rental income,” and the White House Office of Management and Budget calculates the foregone tax that results from it at $50 billion a year.

6. Deductibility of state and local taxes. The rationale behind this deduction is that taxes paid to state or local governments reduce a taxpayer’s ability to pay federal income tax. But state and local taxes essentially “pay” for services that, if purchased directly by the taxpayer, would not be deductible. The benefits of this deduction are disproportionately enjoyed by the wealthy, property owners, and residents of high-tax states. Because so many of those high-tax states are blue, this is one tax deduction that some conservative activists actually want dead.

7. Acclerated depreciation. The tax code allows businesses to deduct the costs of investing in such things as equipment faster than the objects in question actually wear out. Seth Hanlon writes for the Center for American Progress: “Accelerated depreciation in general should be thought of as a multibillion-dollar federal spending program that subsidizes business investments. And when they single out specific industries for special benefit, depreciation rules are akin to spending ‘earmarks.'”

8. Capital gains. Salaries, rents, royalties, interest — they’re all considered regular income by the IRS, and get taxed at marginal rates up to 35 percent. But income from the sale of capital assets held for more than a year is considered long-term capital gains, and gets taxed at a flat 15 percent rate. This is a huge windfall for the investor class — and represents a quarter of a trillion dollars in lost revenue over 5 years.

9. Deductibility of charitable contributions. The IRS allows taxpayers to deduct charitable contributions from their taxable income. This amounts to an approximately $43 billion a year subsidy to charitable organizations — and because of progressive taxation, the deduction is more valuable to rich taxpayers than to poor ones. One scholar recently proposed doubling the deduction temporarily to stimulate job growth; but there is actually more talk about reducing or adjusting it instead.

10. Employer plans. This refers to employment-based retirement plans other than 401(K)s. See No. 4.

This entry was posted in CAPITALISM, ECONOMY, POLICY, Tax cuts for the rich. Bookmark the permalink.