The hidden roots of Egypt’s despair 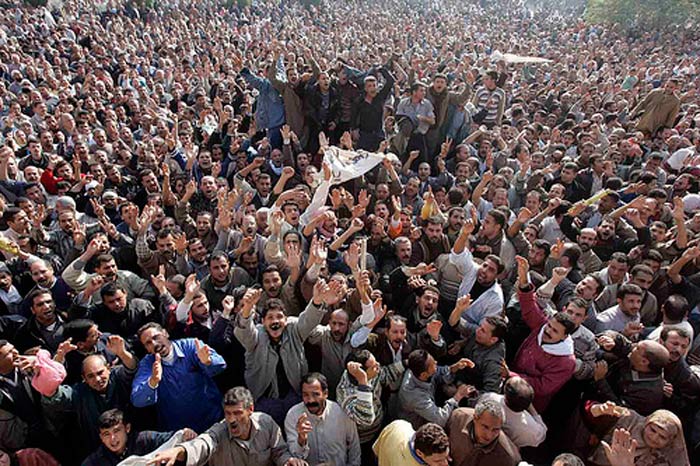 The economic crisis is driving political protests sparked in part by US financial speculation.

The question is, why aren’t Americans up in arms too as inflation at the pump and the grocery store drives prices higher here?

This is an upstairs/downstairs story that takes us from the peak of a Western mountaintop for the wealthy to spreading mass despair in the valleys of the Third World poor.

It is about how the solutions for the world financial crisis that the CEOs and Big pols are massaging in a posh conference centre in snowy Davos, Switzerland have turned into a global economic catastrophe in the streets of Cairo, the current ground zero of a certain-to-spread wave of international unrest.

Yes, the tens of thousands in the streets demanding the ouster of the cruel Mubarak regime are pressing for their right to make a political choice, but they are being driven by an economic disaster that have sent unemployment skyrocketing and food prices climbing.

People are out in the streets not just to meet but by their need to eat.

As Nouriel Roubini – who was among the first to predict the financial crisis while others were pooh-poohing him as “Dr Doom” – says, don’t just look at the crowds in Cairo, but what is motivating them now after years of silence and repression.

He says that the dramatic rise in energy and food prices has become a major global threat and a leading factor that has gone largely unreported in the coverage of events in Egypt.

“What has happened in Tunisia is happening right now in Egypt, but also riots in Morocco, Algeria and Pakistan are related not only to high unemployment rates and to income and wealth inequality, but also to this very sharp rise in food and commodity prices,” Roubini said.

For instance, prices in Egypt are up 17% because of a worldwide surge in commodity prices.

Now here’s a key fact buried in a CNN Money report – the kind intended for investors, not the public at large: “About 40% of Egypt’s citizens live off less than $2 a day, so any price increase hurts.”

Think about that: what would you be doing if you were living off $2 a day? You won’t be drinking mochaccinos at Starbucks, that’s for sure.

Trust me, the people on top are following this unrest closely on Wall Street as anxiety grows. Reports the Washington Post:

US stocks declined sharply Friday as violent clashes in Egypt injected a jolt of anxiety into global financial markets.

Egypt is central to US interests in the Middle East as a moderate state and a key player in both counter-terrorism operations and regional peace negotiations, said Helima L. Croft, a geopolitical analyst at Barclays Capital.

If street protests were to end president Hosni Mubarak’s nearly 30-year hold on power, “I think there would be a fear that you could see radicalism sweeping across the Middle East,” Croft said, adding that the fear might be unfounded.

Beyond its political significance, Egypt controls the Suez Canal, an important shipping lane.

Suddenly, there are worries about Egypt not being able to pay off its debt, and suddenly was pronounced riskier than Iraq, according to Bloomberg:

The cost of protecting Egyptian debt against default for five years with the contracts jumped 69 basis points, or 0.69 per cent points, this week to 375 today, compared with 328 for Iraq, according to prices from CMA, a data provider in London. Just last week, Iraqi swaps cost 19 basis points more than Egypt’s, and in June, an average 240 basis points more, as Iraq recovered from the US-led invasion in 2003.

The unrest, inspired by the revolt that toppled Tunisia’s leader, “does raise political risks,” said Eric Fine, a portfolio manager in New York who helps Van Eck Associates Corp. oversee $3 billion in emerging-market assets. “If this is a revolution, the price of risk for Egypt could go much higher, and if it’s a failed one” the cost will drop to 300 basis points and probably 250, Fine said in a phone interview.

While most of the increases in food prices are due to droughts and floods, US policy contributed to it mightily, argues Mike “Mish” Shedlock on his global economic blog, revealing a reality the media has missed:

Bernanke’s “Quantitative Easing” policies combined with rampant credit growth in China and India has led to increased speculation in commodities. That speculation has forced up food prices.

Please note that speculation in commodities is not a cause of anything. Rather commodity speculation is a result of piss poor monetary policies not only the Fed, but central bankers worldwide.

The financiers schmoozing at the World Economic Forum in Davos know all about this and are worried as well, as Bloomberg News reported:

“This protest won’t end in North Africa; it will spread in many countries because of high unemployment and increasing food prices,” Hamza Alkholi, chairman and chief executive of Saudi Alkholi Group, a holding company investing in industrials and real estate, said in an interview in Davos, Switzerland.

In an age of globalisation, a hike in global prices will spread unrest globally. Egypt had its own “bread riot” in 1977 when prices went up suddenly on the orders of the World Bank, so it is no stranger to the need to fight back.

The question is, why aren’t Americans up in arms too as inflation at the pump and the grocery store drives prices higher here? Part of the reason is that they don’t know that the US has worse economic inequality according to a scientific measure: The Gini Coefficient.

He asks, “so why are Egyptians rioting, while the Americans are complacent?”

According to the report, Building a Better America (PDF), Dan Ariely of Duke University and Michael I. Norton of Harvard Business School show that Americans appear to “drastically underestimate the current level of wealth inequality”.

And why is that? Could our media have anything to do with it – a media consumed with ‘when it bleeds it leads’, but where context and background are missing?

The views expressed in this article are the author’s own and do not necessarily reflect Al Jazeera’s editorial policy.

This entry was posted in CAPITALISM, DEMOCRACY, GLOBALIZATION, INTERNATIONAL. Bookmark the permalink.