Posted on Saturday, January 22, 2011 by meganwilson

You would have difficulty finding a company that has outsourced more jobs and closed more American factories than GE. 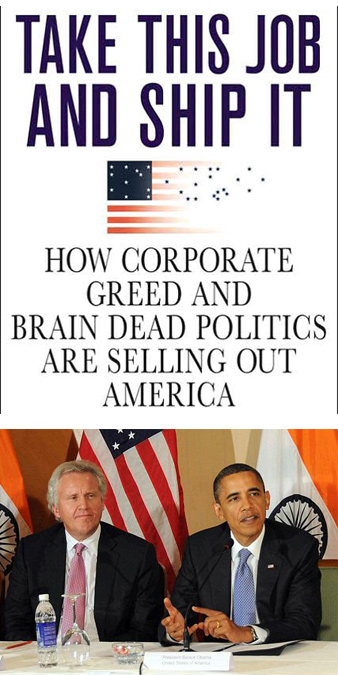 There is no swifter way to alienate working class voters than to name an outsourcing CEO to lead your jobs strategy. Yet that’s exactly what President Obama is doing.

General Electric CEO Jeffrey Immelt has fooled the media and the White House into believing that he cares about American manufacturing jobs. I have a hard time imagining a worse pick, unless Obama would have tapped Immelt’s predecessor Jack Welch, who seemed fine with the idea of putting factories on barges in search of the lowest wages in the world.

Let’s look at GE’s jobs record. You would have difficulty finding a company that has outsourced more jobs and closed more American factories than GE. While they have slashed their American workforce to fewer than 150,000, GE has dramatically expanded its global presence, now employing over 300,000 workers worldwide. Yes, GE has brought a trickle of jobs back to the U.S. over the past two years, but it still outsources more than it insources. And those executives at GE are not clueless–they realize the value of good publicity as it announces new hires at a time like this. But they do not devote nearly the same amount of publicity to their factory closings.

Immelt’s prescription for boosting manufacturing harkens back to the days of bloodletting as a medical procedure — bad policy with consistently poor results:

The result of policies Immelt has supported: one-third of our manufacturing workforce gone in a decade. 50,000 shuttered factories. At least $245 billion in real wage and salary losses for manufacturing workers. Record trade deficits with China. In short, our worst decade in manufacturing history–by most measures even worse than the Great Depression.

Blue collar workers in the industrial heartland–swing states like Pennsylvania, Ohio, Michigan, Indiana and Wisconsin–will not be impressed. The president would have been well advised to select a business leader committed to pragmatic policies to revitalizing manufacturing. Intel’s former CEO Andy Grove, U.S. Steel’s John Surma, Nucor’s Dan DiMicco, or Chandra Brown of United Streetcar–which built an industry out of nothing–would all have been far superior choices. And, leading thinkers on manufacturing strategy like Leo Gerard of the United Steelworkers should be intimately involved.

The White House jobs council will fail unless it embraces ideas that will get our economy moving again and that enjoy widespread support. Here’s a good list for them to start with:

Some of these ideas have already been embraced by the President and Jeffrey Immelt, but key aspects of this plan have been summarily rejected by Immelt in the past. If the President really wants a game changer on jobs, he picked the wrong guy with the wrong ideas to lead the effort.