Posted on Saturday, October 15, 2011 by cherylmeeker 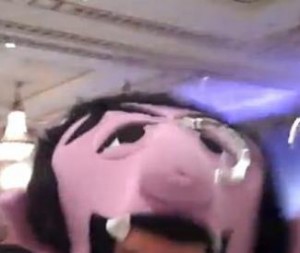 “I pledge allegiance to McDonalds!”

In the Grand Ballroom of the Palace Hotel in downtown San Francisco on Oct. 14, News Corporation CEO Rupert Murdoch delivered a keynote address to a crowd that included senators, businesspeople, and high-ranking education officials from throughout the country — yet he was interrupted repeatedly by activists, some of whom were dressed as Sesame Street characters.

Murdoch was there to speak at an annual summit held by the Foundation for Excellence in Education, a Florida-based nonprofit led by Jeb Bush. The billionaire media mogul, who came under pressure in recent months as the News of the World phone-hacking scandal erupted, spoke about revolutionizing education with technology.

Several moments after he began speaking, a man wearing a suit stood and yelled out, “Isn’t it time to resist corporate domination?” In what seemed like an odd statement, he added, “They’re occupying Wall Street — maybe they should be occupying Sesame Street!” He was quickly escorted out by hotel security, but this proved to be only the first of a handful of outbursts orchestrated by San Francisco U.S. Uncut, a grassroots organization that plans actions to draw attention to income inequality and low taxes for major corporations.

Murdoch referenced his friendship with Apple founder Steve Jobs, who passed away less than a week ago, and praised the iPad as an educational tool. But protesters dressed as characters from Sesame Street — Elmo and Count von Count, for instance — stood and spoke out of turn from tables throughout the room. “Mr. Murdoch, I’ve been doing some counting,” the activist dressed as the Count yelled out. “Seven corporations own all the media in the world — why shouldn’t they own all the education as well?”

There were five different interruptions in all, the final featuring a woman who yelled out, “Occupy, occupy, occupy!”