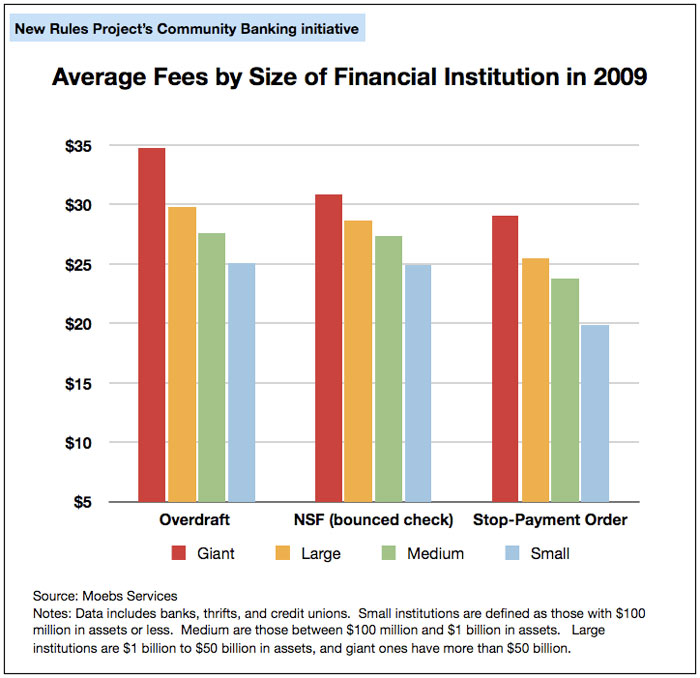 To find a community bank or credit union near you, visit www.moveyourmoneyproject.org

More than 4 million accounts have already moved away from the nation’s largest banks and this trend will only increase according to Moebs Services, an economic research firm in Lake Bluff, IL. Previously, large banks with over $50 billion in assets held 45% of the 130 million consumer checking accounts in 2009. That number has been decreasing dramatically with Bank of America losing 400,000 accounts in 2010 alone.

This trend will only continue, according to Michael Moebs, CEO of Moebs Services, who predicts an additional 7 to 9 million accounts moving by the end of 2011. The trend should plateau in 2012 after the nation’s largest banks see between 13 and 17 million accounts moving to local community banks and credit unions in just three short years. If Moebs’ predictions come to fruition, the largest financial firms will only hold a third of all free checking accounts in the US by the end of 2012, a huge drop from the 45% they held in 2009.

This mass-exodus from the nation’s ‘Too Big To Fail’ firms is by no means accidental. Customers are beginning to wise-up to Wall Street’s abuses and are choosing to vote with their dollars. The Move Your Money project, a campaign that began around a Christmas dinner table by Arianna Huffington and a few friends, encouraged individuals and institutions to divest from the nation’s largest Wall Street banks and move to local financial institutions. One year later, the campaign has been a major success, boasting over 36,000 supporters and coverage in more than 150 different media outlets. The Move Your Money project continues to give the disenfranchised American a chance to truly make a statement against the financial firms who wreaked havoc on our economy.

Not only are people seeing the moral imperative to move their money out of the ‘Too Big To Fail’ firms, they are also growing weary of the exorbitantly high fees that Wall Street execs continually dream up and dupe their customers into paying. Previously, banks were allowed to enroll consumers into “overdraft protection” which allowed a person to spend beyond their checking account, but with a hefty fee ranging from $25-35. After the Dodd-Frank Wall Street Reform bill passed in July of last year, the rules have changed and consumers have to opt-in for overdraft protection.

Unfortunately, it didn’t take the banks long to come up with new ways to swindle money from their customers. Bank of America, Wells Fargo and JP Morgan Chase have already begun experimenting with new fee structures based on consumer behavior such as maintaining a certain minimum balance, enrolling in direct deposit and using a debit card a certain number of times each month. Banks are also beginning to charge customers monthly fees for what once was a free checking account, and customers are beginning to take notice. Derek Juhl of Seattle went into Chase to close his account after he found a monthly fee had been attached to his once free checking account and was told, “Congress made us do it,” a fairly disingenuous claim considering 65% of banks still offer free checking in-spite of the new rules.

Moebs predicts that with an increase in fees, the largest banks have signaled an intention to move away from free checking accounts altogether, in large part because the endeavor is no longer profitable for them. Moebs explains, “If banks have high overhead, deposit accounts are not helpful. Usually banks in the transaction business have to be very efficient and be within their economies of scale.”

Moebs, who created a process on economies of scale, patent pending, explains that the large financial institutions have long surpassed this mark and are currently trying to reign in on overhead by getting rid of their least profitable customers–people who maintain low balances and commit too many errors like overdrawing their account and bouncing checks.

So what are you waiting for? Don’t wait for the Wall Street firms to nickel-and-dime you, move your money today!

To find a community bank or credit union near you, visit www.moveyourmoneyproject.org