Posted on Monday, November 14, 2011 by cherylmeeker 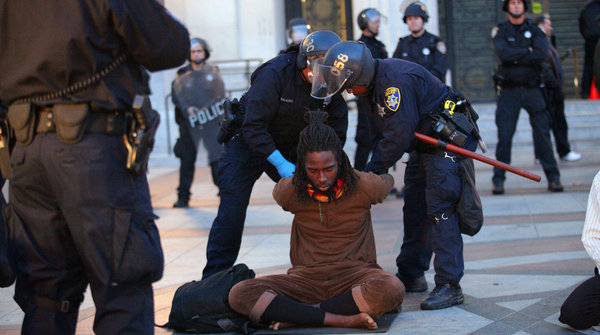 OAKLAND, Calif. — Hundreds of police officers in riot gear raided the Occupy Oakland encampment downtown on Monday morning, making arrests and flattening tents after city officials had issued several warnings for protesters to abandon the camp in the wake of the fatal shooting last week of a man who had been staying there.

The pre-dawn raid was the second on the encampment, one of hundreds that have sprung up around the country in which protesters are calling for a variety of reforms, many of them aimed at corporations and the financial industry.

When the police arrived at Frank Ogawa Plaza on Monday at about 4 a.m., there were far fewer demonstrators at the camp than usual because many of them were marching in a nearby intersection and others had already departed because of rumors of an impending police crackdown.

The authorities quickly set up metal barricades between the crowd and the camp and then moved into the plaza, arresting 32 people as police helicopters with spotlights circled overhead.

Unlike the first raid, on Oct. 25, when the Oakland police shot projectiles and used tear gas against demonstrators, there was no reported violence Monday, and by midmorning, there were only about two dozen protesters left in the streets around the plaza. City workers, dressed in white coveralls, had begun to clear the plaza of tents and other belongings accumulated during the more than month-long demonstration.

At a news conference, Mayor Jean Quan of Oakland said that dismantling the encampment, which toward its peak had about 200 tents, was in the best interest of the protesters.

“We had to bring the camp to an end before more people were hurt,” she said.

City officials said the plaza might reopen to the public as early as Monday evening, but that camping or sleeping there would be prohibited.

“There will be a strong police presence at the plaza 24-7,” said Howard Jordan, Oakland’s police chief.