Limousine Liberals? Number of Government-Owned Limos Has Soared Under Obama 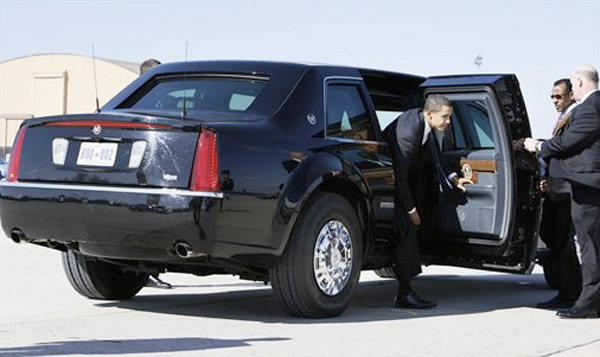 Limousines, the very symbol of wealth and excess, are usually the domain of corporate executives and the rich. But the number of limos owned by Uncle Sam increased by 73 percent during the first two years of the Obama administration, according to an analysis of records by iWatch News.

Most of the increase was recorded in Hillary Clinton’s State Department.

Obama administration officials said most of the increase reflects an enhanced effort to protect diplomats and other government officials in a dangerous world. But a watchdog group says the abundance of limos sends the wrong message in the midst of a budget crisis. The increase in limos comes to light on the heels of an executive order from President Obama last week that charges agencies to increase the fuel efficiency of their fleets.

According to General Services Administration data, the number of limousines in the federal fleet increased from 238 in fiscal 2008, the last year of the George W. Bush administration, to 412 in 2010. Much of the 73 percent increase–111 of the 174 additional limos–took place in fiscal 2009, more than eight months of which corresponded with Obama’s first year in office.  However, some of those purchases could reflect requests made by the Bush administration during an appropriations process that would have begun in the spring of 2008.

The GSA said its limousine numbers are not reliable, even though the federal fleet numbers are officially recorded every year.  In a statement, GSA spokeswoman Sara Merriam said, “The categories in the Fleet Report are overly broad, and the term ‘limousine’ is not defined,” adding that “vehicles represented as limousines can range from protective duty vehicles to sedans.” Asked whether the GSA actually knows how many limos it has in its fleet, Merriam responded that GSA “cannot say that its report accurately reflects the number of limousines.”

Leslie Paige, a spokeswoman for the nonprofit watchdog group Citizens Against Government Waste, was outraged that the GSA’s numbers may not be accurate. “They can’t figure out a way to define a limo? How hard can it be? If the government can’t track limos, I’m not sure we should trust the numbers they put out there on anything,” she said.

Although the overall limo numbers in the fleet report were up in 2010, federal agencies and departments did not benefit equally. The State Department, with 259, had more limos than any other agency in 2010 and has gained 194 limos just since fiscal 2008. Of those new limos, 98 were defined as “law enforcement,” which the GSA said means they are equipped with sirens or lights, high-performance drivetrains, or are used for surveillance or undercover operations.

The State Department in a statement said its limos are deployed by overseas diplomats and in the United States by Secretary of State Clinton and “distinguished foreign visitors.”  Many of the limos in its fleet are armored to protect against attack. The department said its Obama-era increase in armored limos is “both in proportion to the increased threat to diplomats serving overseas and is in proportion to the increase number of diplomats we have serving in high threat environments.” Appropriations documents indicate the State Department was engaged in a longer-term effort to increase the number of armored vehicles that would have stretched back to at least 2007.

The department said it defines a limo as a vehicle that carries a VIP or “other protectee,” rather than by the type of car, but said most of its limos are Cadillac DTSs, which cost the taxpayer more than $60,000 for a 2011 base model and support the additional weight of armoring. The department said it also purchased a limited number of 7-Series BMWs for ambassadors in countries where vehicles are right-hand drive.

The Department of Homeland Security, which in 2010 had the second largest number of limos at 118, dropped four limos from 2008 to 2010. A spokesman for DHS said the majority of its limos are used by the Secret Service, which is part of the department, but declined to elaborate on exact numbers, citing security concerns.

Paige, of CAGW, called the new federal limos “one more reason why there is so much cynicism in the public about what goes on in Washington.” She said terrorism and security has become the catchall justification for increased federal spending.

The increase in limos comes at a time when the Obama administration is increasingly working to burnish its green energy credentials by targeting the federal fleet.  On Tuesday, Obama released a presidential memorandum requiring agencies to purchase only alternative fuel vehicles by 2015. The memorandum limits executive fleets to mid-sized and smaller cars “except where larger sedans are essential to the agency mission.” It also exempts law enforcement and security vehicles, which could make up the majority of the federal  limo fleet.

According to a March report by the GAO, the federal government spent $1.9 billion on new vehicles in fiscal 2009, and burned through 963,000 gallons of fuel  a day with its fleet of 600,00 vehicles.

The number of limousines in the federal fleet has varied over the years. In 2007, the number dropped to 217 from 318 a year before. But due to the fuzzy GSA accounting, it’s unclear exactly how many federal limos have been on the road.

According to the GSA report, for example, the U.S. Agency for International Development, which had zero limos in 2008, added six limos to its fleet in 2009. But agency spokesman Lars Anderson said that’s because six standard overseas sedans, including a 1997 Ford Crown Victoria in Bangladesh, and a 2009 Mercury Grand Marquis in El Salvador, were incorrectly recorded as limos.

If the data is correct, some federal employees who once rode in style now face more proletarian transportation options. The Department of Veterans Affairs, for example, ran a fleet of 21 limousines in 2008 under George W. Bush, according to the fleet report. It now makes do with only one.  The Government Printing Office also lost all of its six limos between 2009 and 2010. The VA and the Government Printing Office did not respond to calls for comment.

This entry was posted in CAPITALISM, GOVERNMENT, GREED. Bookmark the permalink.