Posted on Saturday, November 30, 2013 by meganwilson 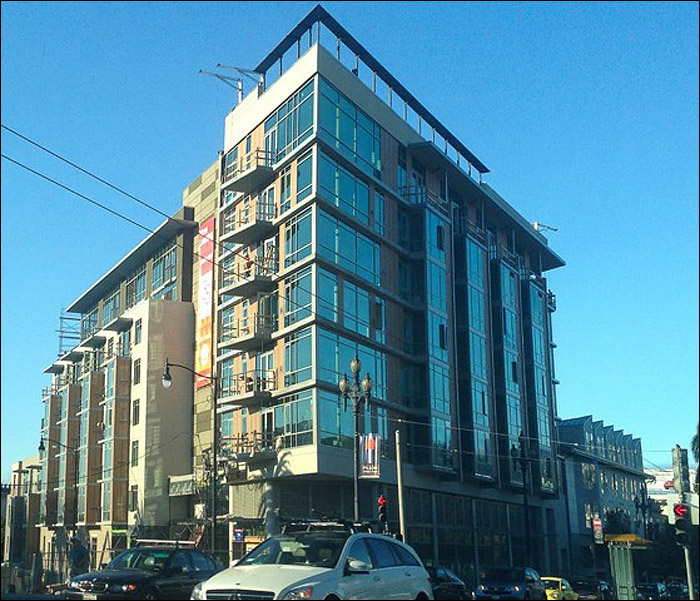 With the clink of champagne glasses, kudos to the development team and its community partners, and the cutting of a red ribbon, the new housing development at 38 Dolores St. had its grand opening celebration on Nov. 14, a couple weeks after the Whole Foods on its ground floor opened its doors to Market Street.

In many ways, 38 Dolores is pretty typical of the new housing opening in this part of town these days. It took seven years to complete the project, “on time and under budget in a way this community can be proud of,” developer Dan Safier of The Prado Group told the assembled crowd.  Read more …

How Clarion Alley Mural Project Met Developer Dan Safier and the Prado Group
This past summer a group of business execs, all clad in expensive black suits rolled into Clarion Alley with a camera crew. As is the case when private tour groups (often part of larger foodie or boutique packages) appear on the alley with little or no connection to the community’s history or struggles, these folks looked ridiculous. Surrounded by murals, most with messages of social and political dissidence (Malcolm X, homelessness, queerness, solidarity for those being forced out by the forces of gentrification, “Tax The Rich”) and standing amidst the strong scent of urine, scattered debris, artists painting, and a small community of homeless vets asking for change, this group could not have looked more out of place. Mesmerized by the space, they were scurrying about scouting for areas to film while excitedly discussing how they’d recently discovered this “magical alley.”

As one of the artists painting on the alley that day and one of the organizers of the overall mural project, I casually approached the man who appeared to be in charge of the team of 1% interlopers and asked what they were filming. He replied that it was for his business’ Website. I pressed for more information and he asked who I was. I introduced myself and told him that I was an organizer with Clarion Alley Mural Project then asked if he had a card. He didn’t, but introduced himself as Dan Safier and his business as the Prado Group. He’d never heard of the Clarion Alley Mural Project.

With confirmation that this was in fact a corporate shoot, I informed him of CAMP’s policy of “no commercial, for-profit, and/or corporate” usage of the murals. Like most folks who hear this, he didn’t understand what I meant since the alley is a public space. I further explained the project’s 20+-year history and that as a volunteer-run, non-profit organization, a committed and revolving group of us have collectively donated tens-of-thousands of hours over two decades organizing, managing, and maintaining the murals on the alley and hosting an annual free public block party with two stages of various bands playing for a day in celebration of the communities that CAMP serves. I reiterated that as a community project, the murals are free for enjoying, but not available for use in commercial, for-profit endeavors.

Everything I said seemed foreign, or rather silly and flowery to this group, as they had varying degrees of smirks on their faces while I gave them some background on the “magical alley” they had discovered. Mr. Safier then wanted to know how the project’s policies were enforced. I reiterated that CAMP is a non-profit organization. He pushed further – who is in charge? What the address of the project’s website? Where are our offices? At that point, I realized it would be easiest and take up less of all of our time if I would just speak in a language that he and his “team” were familiar with: “We register our works with the U.S. Copyright Office and we have an attorney, that’s how we enforce our policies.” Team Prado Group huddled to discuss and then packed up and left.

It was yet another moment that has become all too familiar in San Francisco; a moment of contemporary colonialism in which a privileged few have discovered a new space that they want to claim as their own via the image it can provide as their marketing tool for profit. A space, that rather than getting to know the background of, and giving the respect due to those who have put the time, energy, and love into to creating it’s allure, is viewed as a disposable commodity to use and exploit. It seems those messages of dissent, permeating wafts of urine, piles of debris, mangy-looking artists, and the men and women who once wore a uniform in the name of a country they would die for, but are now forced to beg for change in to survive – are all “magical” if they can provide the gritty backdrop for a bunch of greedy developers to sell their gentrification projects to other shallow, greedy kin. Otherwise, these “magical” elements are just nuisances and impediments to be discarded and destroyed.