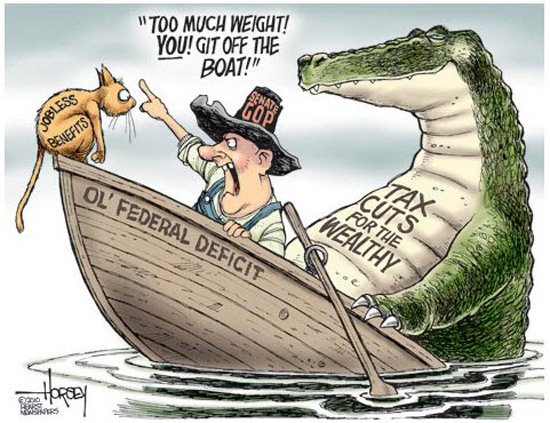 Over two years, tax cuts for the wealthy will cost the government about $120 billion and will create or save about 290,000 jobs, according to analysis by the White House-aligned research group Center for American Progress. That’s a cost of about $400,000 per job, many of which will likely yield salaries far below that value.

NEW YORK — Today, as Americans submit their tax returns, the wealthiest earners will each reap hundreds of thousands of dollars in tax savings.

As part of a law passed late last year, the Bush-era tax cuts for the richest Americans were extended for two years. The estimated cost to the government of that portion of the tax deal, $42 billion this fiscal year, exceeds the stated $38 billion value of the savings from the federal budget cuts lawmakers approved last week.

Those budget cuts, which will affect many services for poor Americans, add more strain to a still weak economy, leading some economists to lament that this allocation of federal resources is not the most efficient way to promote economic growth.

“I don’t think it’s a good time to be trimming federal outlays if you’re interested in the vulnerability of the economy,” said economist Gary Burtless, formerly with the Labor Department and now at the Brookings Institution. “I’m not quite sure where the theories come from that this is going to strengthen economic growth over the next 12 to 18 months. It’s going to have the reverse effect. It’s going to slow it down.”

In the wake of the worst economic downturn since the Great Depression, the economic recovery has been uneven. The financial sector, which employs some of the country’s wealthiest citizens as its executives, has seen profits rebound. Pay at top financial firms has multiplied, while wages for most Americans have stagnated.

Between January 2008 and January 2010, the private sector lost nearly 8 million jobs. Last year, payrolls began to expand, but the pace of the recovery has been slow. With companies reluctant to spend their reserve cash on hiring, the unemployment rate remains high. Last month, 8.8 percent of the workforce was unemployed, a figure that would be significantly greater if it included the millions of jobless Americans who have entirely given up looking for work.

Thanks to the tax cut extension passed last year, struggling Americans will get to keep a few thousand dollars that otherwise would have gone to the government. A family making between $50,000 and $75,000, for instance, saves just over $2,000 on average, according to the non-partisan Tax Policy Center. From a broad economic perspective, that’s money Americans can spend on themselves, theoretically boosting demand, stimulating business activity and generally helping promote a recovery.

Over two years, tax cuts for the wealthy will cost the government about $120 billion and will create or save about 290,000 jobs, according to analysis by the White House-aligned research group Center for American Progress. That’s a cost of about $400,000 per job, many of which will likely yield salaries far below that value.

The tax extension seems especially hard for critics to swallow in light of last week’s federal budget deal, which calls for spending cuts of about $38 billion. In comparison, tax breaks for the wealthy will cost the government $42 billion during this fiscal year, according to Michael Linden, director for tax and budget policy at the Center for American Progress.

The cuts come at a period of economic weakness, when those who most rely on government services struggle to put food on the table. Last week, the International Monetary Fund cut its forecast for U.S. economic growth — by the same degree as it cut its forecast for Japan, whose economy faces a major strain as the country attempts to rebuild after a devastating earthquake and tsunami.

While these proposed cuts represent only a small percentage of the year’s budget, they are an important first step, said Zandi, who has advised lawmakers from both parties.

“I think it’s entirely appropriate to focus on discretionary spending, and how we can reduce it going forward,” Zandi said. “My druthers would not have been to cut as deeply right now, until the economy is off and running.”

The deficit-reduction plan put forth by President Barack Obama in a speech on Wednesday includes a combination of cutting spending and ending tax breaks for the wealthy when those naturally expire. He laid out a strategy for reducing the deficit by $4 trillion over 12 years, calling for additional cuts across the board.

“If they make serious cuts over time, that’s actually going to be quite good for the economy,” said Andrew Lo, professor of finance at the MIT Sloan School of Management. “It’s bitter medicine, but we’ve got to take it.”

This entry was posted in CAPITALISM, GREED, POLICY, Tax cuts for the rich. Bookmark the permalink.