Corporations Are Not People 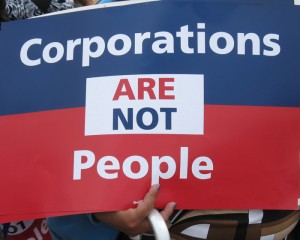 This week marks the second anniversary of the infamous Supreme Court decision Citizens United v. FEC.  In a nutshell, Citizens United declared that corporations are people, and money is speech.  This opened the floodgates for unlimited corporate cash in U.S. elections. You can read more about the disastrous effects we’ve already seen from this HERE and HERE.

Corporations can contribute unlimited funds to independent campaign expenditure groups as the law stands now, and still, the RNC is unhappy with anything short of being able to sell votes directly. According to the New York Times, they want a return to the days of the robber barons.

What’s at stake here is the American democracy as we know it, and the way to take it back is through a constitutional amendment reversing Citizens United.  There are already nine amendments floating around Congress and a groundswell of public activism spearheaded by a coalition of organizations including MoveOn, Move to Amend, Common Cause, Public Citizen, the Other 98%, and many others.

Also, a number of states and local governments have passed resolutions in support of an end to corporate personhood.