Blowin’ in the Idiot Wind 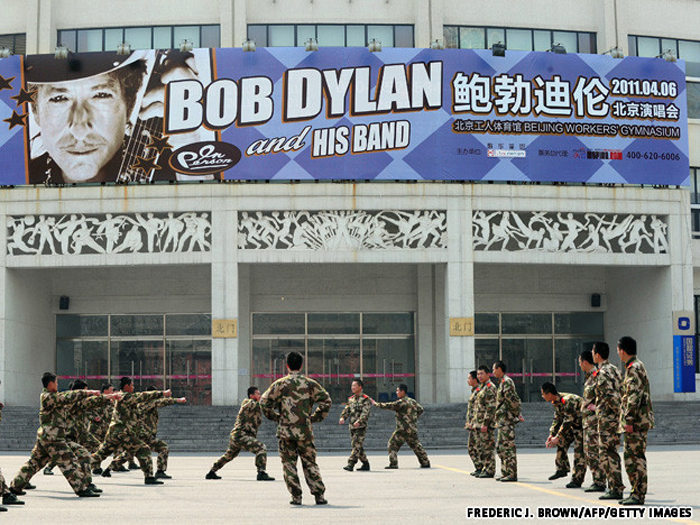 Bob Dylan may have done the impossible: broken creative new ground in selling out.

The idea that the raspy troubadour of ’60s freedom anthems would go to a dictatorship and not sing those anthems is a whole new kind of sellout — even worse than Beyoncé, Mariah and Usher collecting millions to croon to Qaddafi’s family, or Elton John raking in a fortune to serenade gay-bashers at Rush Limbaugh’s fourth wedding.

Before Dylan was allowed to have his first concert in China on Wednesday at the Worker’s Gymnasium in Beijing, he ignored his own warning in “Subterranean Homesick Blues” — “Better stay away from those that carry around a fire hose” — and let the government pre-approve his set.

Iconic songs of revolution like “The Times They Are a-Changin,’ ” and “Blowin’ in the Wind” wouldn’t have been an appropriate soundtrack for the 2,000 Chinese apparatchiks in the audience taking a relaxing break from repression.

Spooked by the surge of democracy sweeping the Middle East, China is conducting the harshest crackdown on artists, lawyers, writers and dissidents in a decade. It is censoring (or “harmonizing,” as it euphemizes) the Internet and dispatching the secret police to arrest willy-nilly, including Ai Weiwei, the famous artist and architect of the Bird’s Nest, Beijing’s Olympic stadium.

Dylan said nothing about Weiwei’s detention, didn’t offer a reprise of “Hurricane,” his song about “the man the authorities came to blame for something that he never done.” He sang his censored set, took his pile of Communist cash and left.

“The Times They Are Not a-Changin’,” noted The Financial Times under a picture of the grizzled 69-year-old on stage in a Panama hat.

“Imagine if the Tea Party in Idaho said to him, ‘You’re not allowed to play whatever,’ you’d get a very different response,” said an outraged Sophie Richardson of Human Rights Watch.

A 22-year-old Dylan did walk off “The Ed Sullivan Show” when CBS censors told him he couldn’t sing “Talkin’ John Birch Paranoid Blues.”

But he’s the first to admit he cashes in.

In Hajdu’s book, “Positively 4th Street,” Dylan is quoted saying that critics who charged that he’d sold out to rock ’n’ roll had it backward.

“I never saw myself as a folksinger,” he said. “They called me that if they wanted to. I didn’t care. I latched on, when I got to New York City, because I saw (what) a huge audience there was. I knew I wasn’t going to stay there. I knew it wasn’t my thing. … I became interested in folk music because I had to make it somehow.”

“Folk music,” he concluded, “is a bunch of fat people.”

He can’t really betray the spirit of the ’60s because he never had it. In his memoir, “Chronicles,” he stressed that he had no interest in being an anti-establishment Pied Piper and that all the “cultural mumbo jumbo” imprisoned his soul and made him nauseated.

“I had very little in common with and knew even less about a generation that I was supposed to be the voice of,” he said.

He wrote that he wanted to have a house with a white picket fence and pink roses in back, live in East Hampton with his wife and pack of kids, eat Cheerios and go to the Rainbow Room and see Frank Sinatra Jr. perform.

“Whatever the counterculture was, I’d seen enough of it,” he wrote. He complained of being “anointed as the Big Bubba of Rebellion, High Priest of Protest, the Czar of Dissent.”

Performing his message songs came to feel “like carrying a package of heavy rotting meat,” he wrote.

Hajdu told me that Dylan has distanced himself from his protest songs because “he’s probably aware of the kind of careerism that’s apparent in that work.” Dylan employed propaganda to get successful but knows those songs are “too rigidly polemical” to be his best work.

“Maybe the Chinese bureaucrats are better music critics than we give them credit for,” Hajdu said, adding that Dylan was now “an old-school touring pro” like Frank Sinatra Sr.

Sean Wilentz, the Princeton professor who wrote “Bob Dylan in America,” said that the Chinese were “trying to guard the audience from some figure who hasn’t existed in 40 years. He’s been frozen in aspic in 1963 but he’s not the guy in the work shirt and blue jeans singing ‘Masters of War.’ ”

Wilentz and Hajdu say you can’t really censor Dylan because his songs are infused with subversion against all kinds of authority, except God. He’s been hard on bosses, courts, pols and anyone corrupted by money and power.

Maybe the songwriter should reread some of his own lyrics: “I think you will find/When your death takes its toll/All the money you made/Will never buy back your soul.”

This entry was posted in ARTISTS/ACTIONS, CAPITALISM, CENSORSHIP, GREED, INTERNATIONAL. Bookmark the permalink.