Behind the Mesh Curtain

Posted on Wednesday, September 4, 2013 by andycox

It seems obvious that superior service is provided to those with more buying power. However, some situations the class dynamics are more obvious. 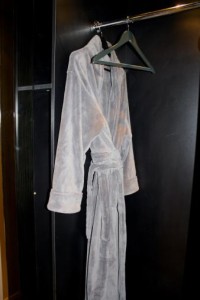 Firstly, what is meant by “service”? Physical comfort or sustenance (hygiene factors) are two things that can gained from spending more money, but in most cases, the additional service is only considered superior because the person has paid more for it. The curve of hygiene quality versus expenditure is not linear – at some point, the curve levels out and the additional expenditure buys only status. Is the sound quality in the seats in the orchestra zone really that much better than the seats in the upper tier? Does a $500 a night room provide more shelter or comfort than a $100 dollar room? Are fluffy robes and down pillows really worth $400?

The rich are of course buying status or, which amounts to the same thing, they are paying to exclude others. A space where this is particularly obvious is airplane cabin. Due to the linear geometry, those in first class are not just  just excluding the hoi poloi but watching as they file to the back of the plane, struggling with their carry-ons and writhing children. I often look at them as they sip their champagne and wonder how they feel: guilty or gloating, or just don’t give a fuck because we’re not even on their radars?

The gap between first class and economy has increased over time – paralleling the growing gap between rich and poor. The drastically reduced leg room territory in economy has been ceded to the first class fiefdom. Is there anyone who does not find grotesque the image of the fully reclining first class sleeper seat? In it lounges the quintessentially pampered passenger completely immobile while tended to by an army of in flight attendants. The whole grotesque scene looks like something out of the hospital of the future. 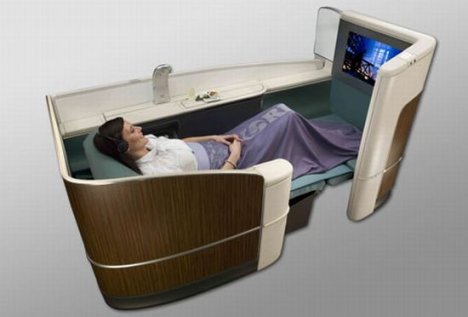 But it is the exclusionary curtain that truly defines the difference between classes on airplanes. Until 2001, these curtains were heavy opaque barriers like the one shown below. Such curtains, deployed at the boundary between airplane seeting classes, virtually provided a real physical barrier when hooked into place. 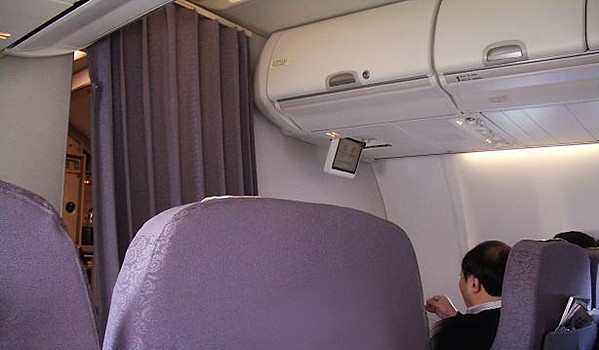 Since 2001, however, the US Transportation Safety Administration has banned the use of such curtains for security reasons. Presumably, they impeded the crew’s (and inflight security personnel) ability to scan the plane for terrorists. Lantal, a “transportation fashion” company devised a solution:

After September 2001, Class Divider Curtains were removed by TSA (Transportation Safety Administration) on all flights in and out of the United States for security reasons. This left airline operators with an almost impossible task to maintain class separation during flight and adhere to the new security mandate. In August 2003, launch customer Continental Airlines came to Lantal for a solution to this problem.

Patrick Ashton, Continental Interiors Engineer quotes, ‘Lantal was instrumental in developing a new fabric that gives our First Class passengers the sense of privacy they expect while complying with the Transportation Safety Administration’s new rules’. Continental Airlines began installation on their fleet in March 2004 and completed all aircraft installation by April 30, 2004. For further information please contact our Sales team. 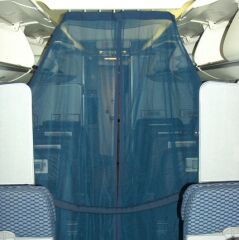 The idea that class separation had to be maintained at all costs is telling. The mesh curtain has virtually no worth as a sound or visual barrier – it operates purely as a sign of exclusion, a sign  of class division, separating the front of the plane from the back of the plane.