emergency alert + venetian bells remix: The test of San Francisco’s emergency outdoor alert system which is broadcast on public PA’s every Tuesday at noon has had new residents and visitors alarmed and long term San Franciscans alternately jerked to a state of orange alert or noting the fleeting weeks of their lives. Sampling, layering and manipulating the Tuesday alert test along with the ringing bells of the Venetian Basilica of San Marco in an audio mélange, Meeker contrasts or conflates the call to prayer or the call to awareness or alertness with the authoritative summons from a civic power apparatus. Meeker played the remix at noon in Union Square and at a CIO event, hoping to transform our weekly fight or flight response into bemusement. 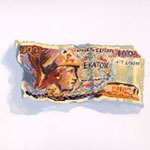 Greek drachma: Created for CIO are two gouache drawings of Greek drachma notes circa 1978, now no longer in circulation since the introduction of the Euro in 2002. These works reference the ancient Greek currency unit found in many Greek city states from Classical times on.

Cheryl Meeker is a visual artist and writer based in San Francisco who uses 4×5 and digital photography, installation, social sculpture, video, drawing, and the Internet to explore sustenance in a financial and market dominated society. She is one of the organizers of Capitalism Is Over! If You Want It, a co-founder and co-publisher of Stretcher.org and works in the collaborative team Dan and Cheryl with Dan Spencer. Her work has been exhibited at Mission 17, Yerba Buena Center for the Arts, Southern Exposure, and the Oakland Art Museum and has recently been seen in a solo exhibition at Gallery 1055, Diocesan House, San Francisco, and in Shadowshop, a project of Stephanie Syjuco at SFMOMA. Her art writing has been published in NYFA Current, Stretcher, and Art Papers. For further information see: http://cherylmeeker.blogspot.com