This Little Piggy Goes To Market and TWCDC  In The Hole at SOMArts, December 2011

Capitalism Is Over! If You Want It is an ongoing movement of interruptions/actions by artists from around the world in response to the need for a fundamental shift in our approach to Capitalism and the negative impact it has on the environment, health, and wellbeing of all. The status quo is not sustainable. The title of the project references John and Yoko’s “War is Over if You Want It” campaign of the late ’60’s – in the spirit that capitalism is our war of today.  The title also reflects how these phenomena are based in our minds and rely on our buy-in to function. Capitalism is not a law of nature. Humans created the system, it no longer works for the majority of the world, and it can be replaced. 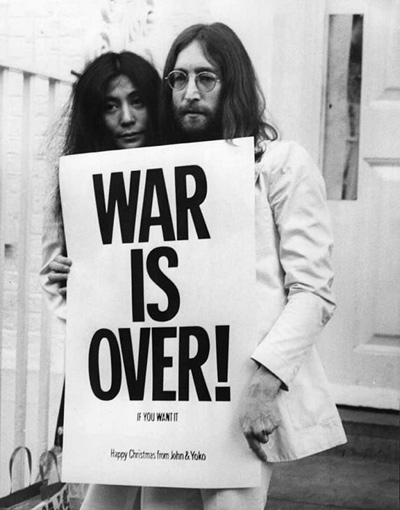 Through Capitalism Is Over! If You Want It our goal is to support and enact alternatives to Capitalism through creative channels. While making art in response to this runaway greed may seem an act of indulgence in itself, we as cultural workers are part of the community interrogating, creating and representing cultural shifts. At the very least we hope to leverage our creative capital to inspire constructive panalogue, network with others committed to the cause, and perhaps provide some fun and runaway thinking.

We launched the movement on July 18, 2010 and to date over 100 artists and arts spaces have staged actions/performances in support of finding an alternative to the current Capitalist model. It has been inspiring and encouraging to be a part of the global revolution that has developed over the past year through the Arab Spring and Occupy Movements and watch as we are growing and gaining momentum and ultimately will manifest in long-term changes to the current status quo. 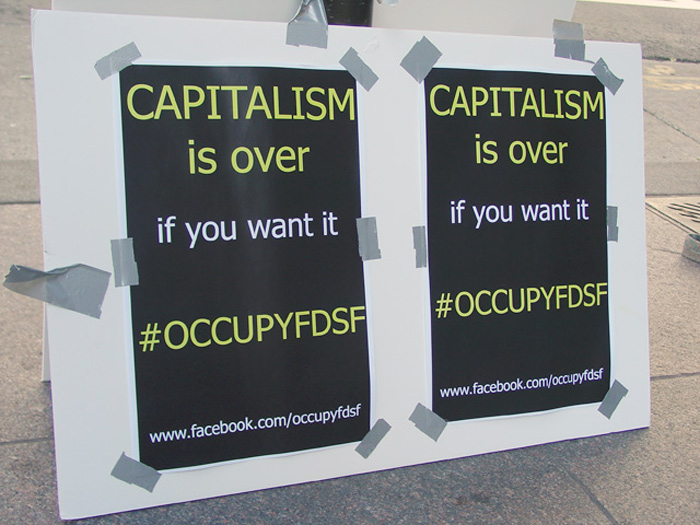 We invite you to join us and participate in response. If you’re interested, please contact us at: CapitalismIsOver@gmail.com.

We want to preserve and promote the following for all beings on the planet:

Points To Consider About The State of Free Market Capitalism:

2. The wealthiest 10% in the U.S. control 73% of American’s net worth. (Edward N. Wolff, Levy Economics Institute of Bard College)

3. Americans are deep in debt. When the Great Depression hit in 1929 the average amount of debt for an American family was about 25 – 30% of its annual income. In 2007 the average amount of debt owed by an American family was 120% of its annual income. Today the proportion of disposable income used just to pay debts is at 17%. (Richard D. Wolff, “Capitalism Hits The Fan,” Brown University)

4. In 2007 humans used the equivalent of 1.5 planet earths to support their activities, meaning it would take a year and a half to regenerate the resources used in one year (World Wildlife Fund, 2010 Living Planet Report).

5. There are 1.8 billion people globally using the Internet, but 1 billion without access to an adequate supply of freshwater (Living Planet Report).

6. Our economy is based on consumption. We make our money by producing goods and services that we will then buy and consume with the money we make thus creating a demand for more to be produced, starting the cycle over. If 16% of the population of Americans eligible to work are unemployed or underemployed (Department of Labor – June, 2011) then that drastically limits consumption, therefore jobs. However, if we’re also using 50% more of the earth’s resources than are available in a year, those resources too will run out and we won’t have jobs anyway … or clean air, food, or water.

7. The cycle deepens because folks not working are also not paying income taxes, and if they lose their homes, they’re not paying property taxes, and if they don’t have jobs, they don’t have money to consume and they’re not paying sales taxes. So governments are making very deep cuts to their budgets, which translates into more jobs lost and more services lost. There’s also not much of the federal budget to cut (though many of us would agree a significant ax to defense spending is long overdue … and is not going to happen.) It should be noted that the Government is the largest employer in the country with 21.2 million people on the payroll. (Department of Labor)

8. America’s education system is failing and more and more countries are advancing and scoring higher in academic achievement than the United States. Among 33 nations in 2009, the United States scored last for reading; 27th in math; and 22nd in Science as reported by the OECD rankings that measured the performance of 15-year-olds. (Organisation for Economic Co-operation and Development)

9. Many economists are comparing the current economic crisis in the U.S. to Japan, which has been experiencing a recession since 1989 (21 years). In a survey conducted by the Kairos Future Institute in 2008 of 22,0000 young people ages 16 – 29 from 17 countries, 54% of American youth believed their “future looks bright;” only 5% of Japanese believed this to be true. In the same survey 60% of American youth responded “I am confident I will have a good job in the future;” only 9% of Japanese youth responded that they have confidence in their employment prospects. (AIESEC Annual Report 2009/10)

10. We’re getting older. The world’s population will increase by roughly one-third over the next 40 years, from 6.9 to 9.1 billion, according to the U.N. Population Division. However, this is not driven by birth rates, which have actually plummeted around the world, but an increase in the number of elderly people. The global population of children under 5 is expected to fall by 49 million as of midcentury, while the number of people over 60 will grow by 1.2 billion. Additionally, disability rates among middle-aged Americans are no longer getting better, but worse. According to a recent Rand Corp. study published in Health Affairs, more than 40 percent of Americans ages 50 to 64 already have difficulties performing daily activities, such as walking a quarter mile or climbing 10 steps without resting — a significant increase from just 10 years ago. Because of this declining physical fitness among the middle-aged, we can expect the next generation of seniors to be far more impaired than the current one.

11. U.S. Corporations are looking to and investing in new markets outside of the United States. That doesn’t just mean they’re moving the manufacturing outside of the U.S.; it means they no longer see the U.S. as the primary market they’re producing for. So when you read or hear the “hopeful” statistics of growth in the economy or the numbers are up in the stock market, what it really means in part, is that corporate executives and big shareholders are doing well because of U.S. corporate activity outside of the United States. (Richard D. Wolff, “Capitalism Hits The Fan,” Brown University)

12. Finally, the question that economist Richard Wolff has posed: “What happens to a country if its economic power is declining, if its political power is declining, if its cultural role in the world is declining – but it still has the most powerful military in the world – what happens when the United States only has one card to play?” and furthermore, what happens if it has a population of millions of people who no longer have work, no longer have a place to live, can’t afford to eat nutritionally, have children they can’t afford to support, have declining health etc and the country has nothing to offer them … but they still have the most powerful military in the world. (Richard D. Wolff, “Capitalism Hits The Fan,” Brown University)