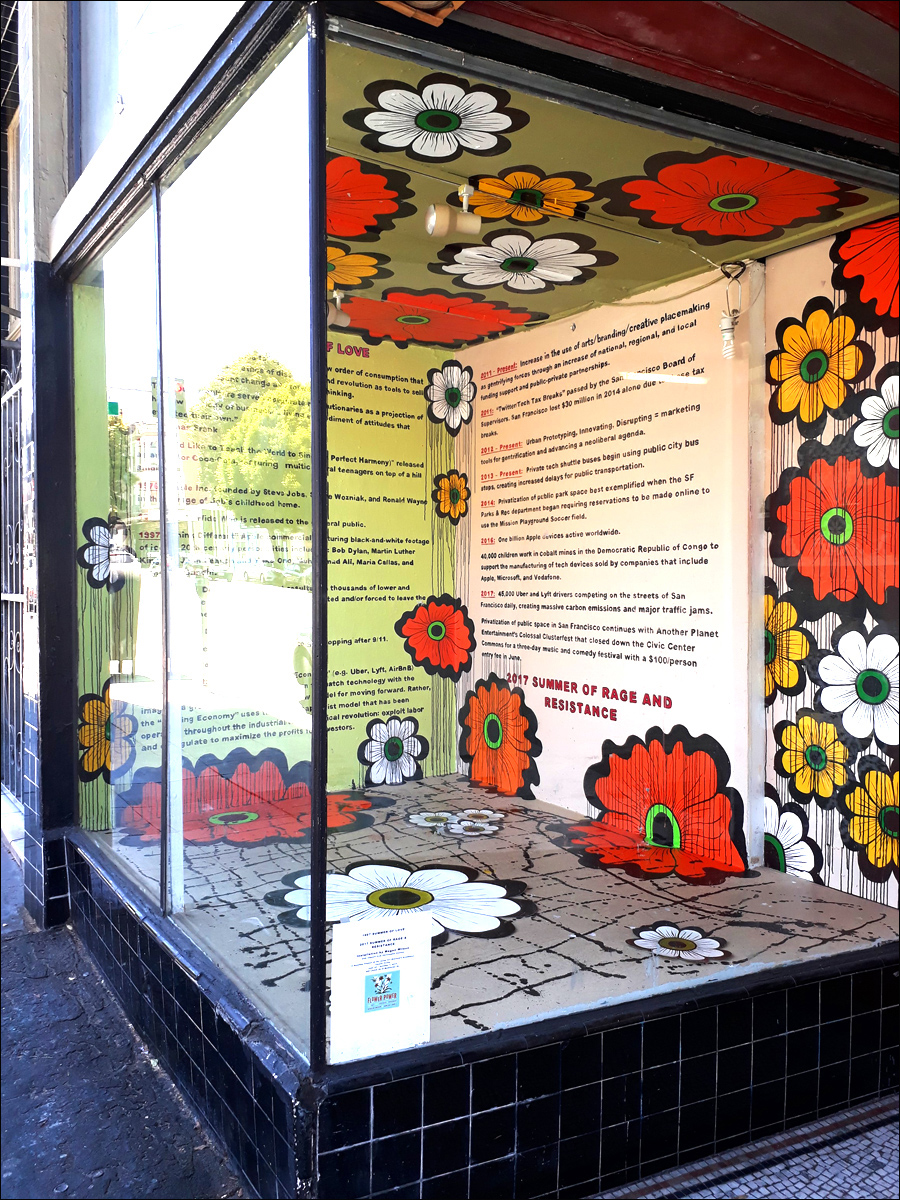 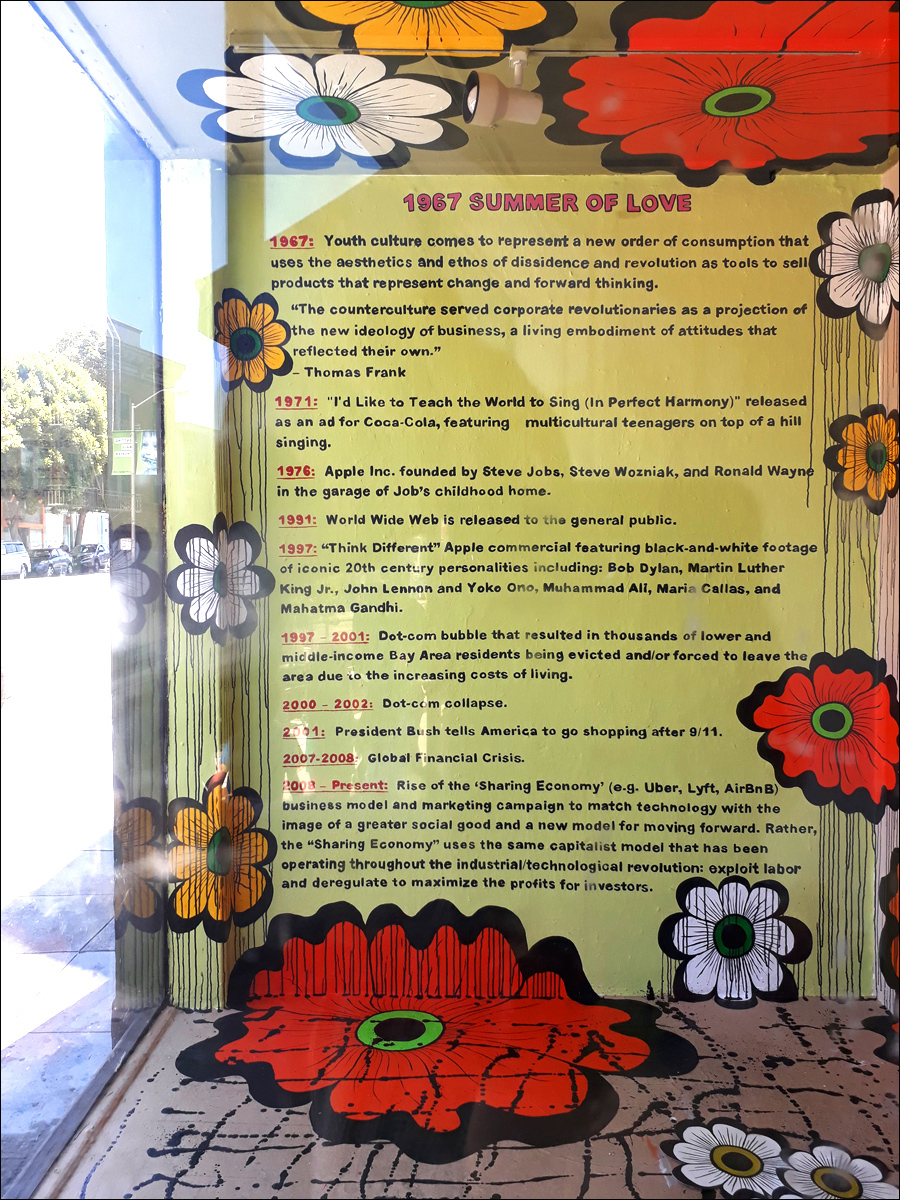 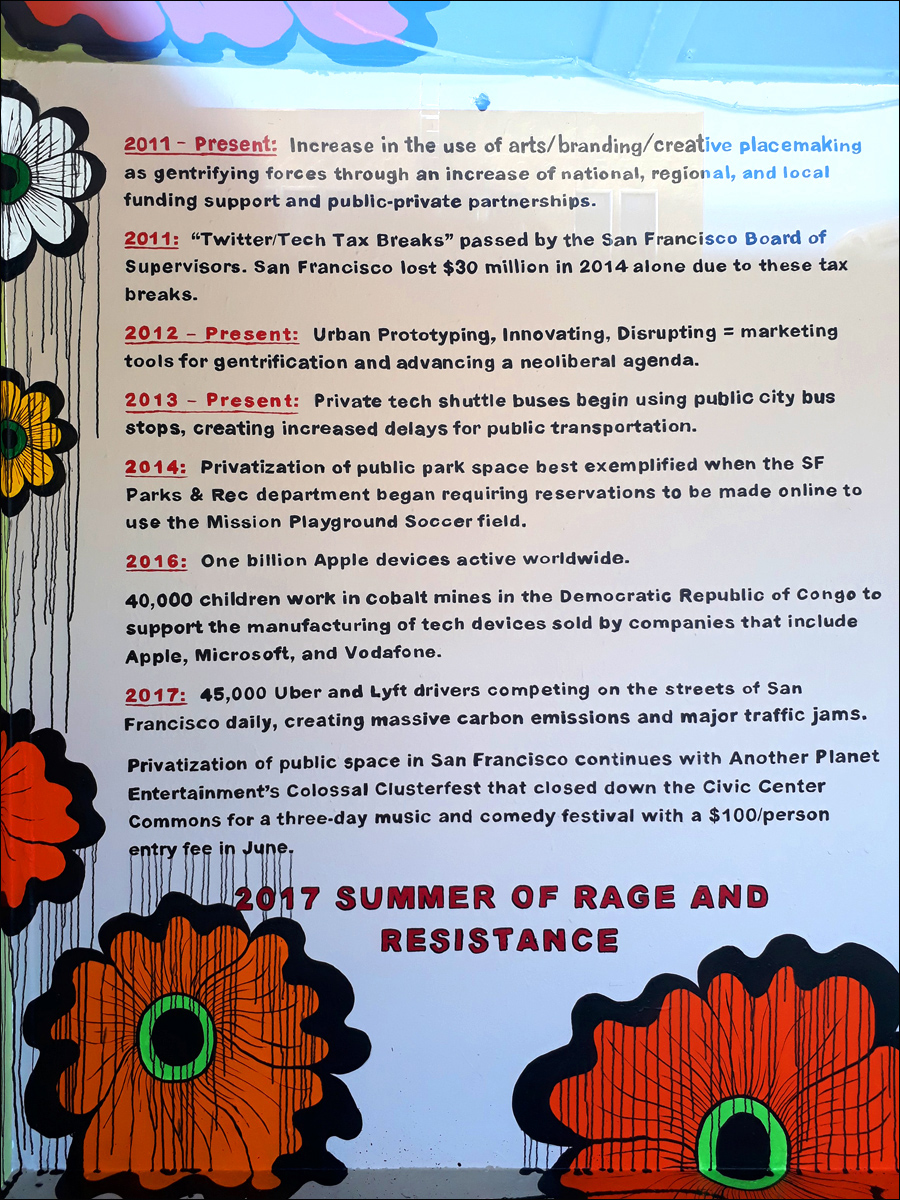 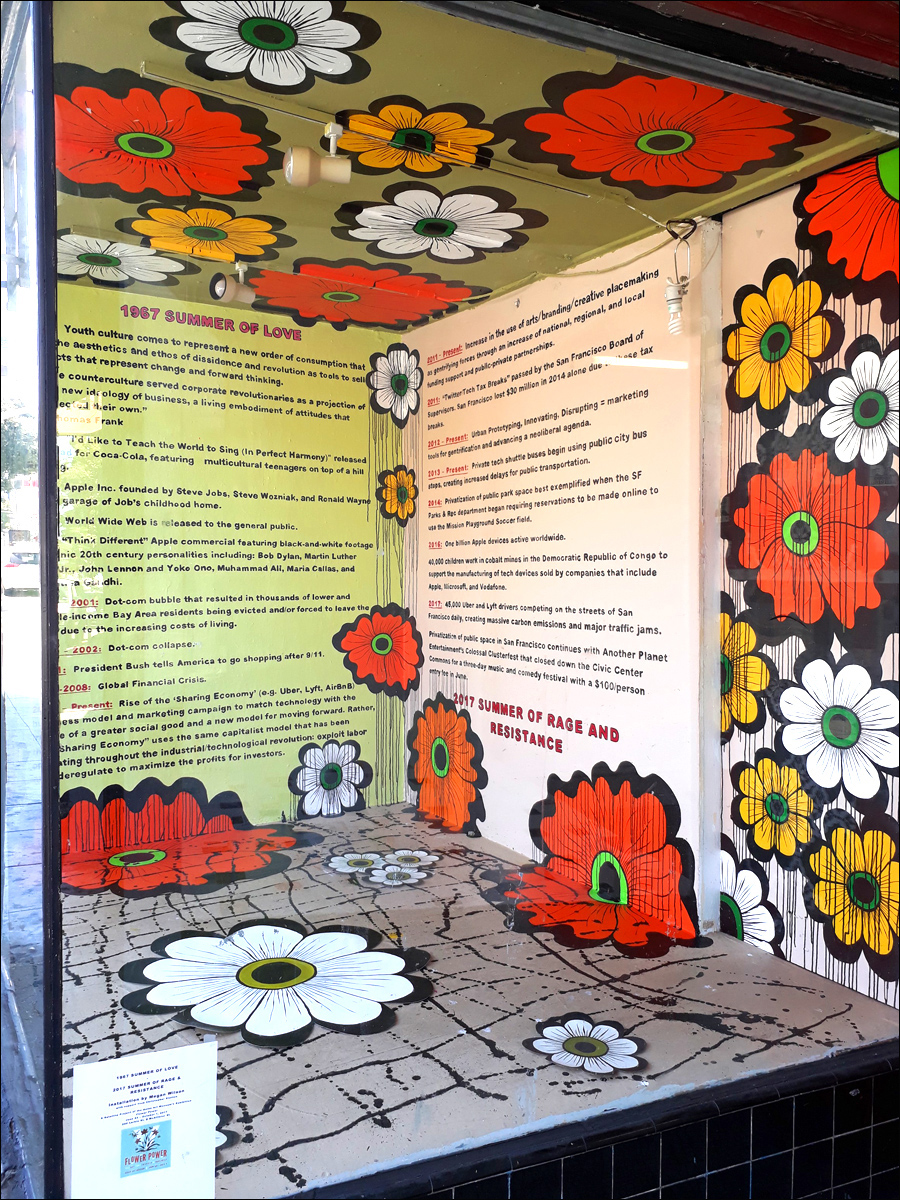 CAPITALISM IS OVER! in Código Magazine!

Posted on Saturday, February 7, 2015 by meganwilson 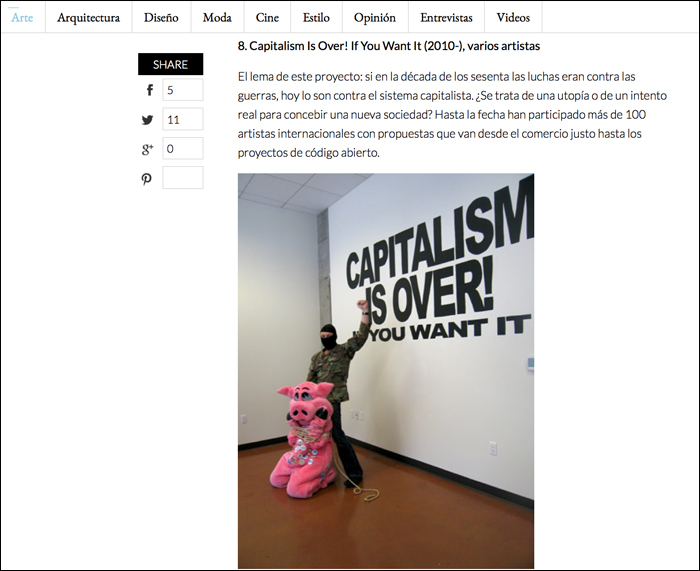 Check out CAPITALISM IS OVER! If You Want It in the Febrero issue of Código Magazine HERE!

Airbnb Had Housing Activists Pushed Into a “Free Speech Zone”

Posted on Monday, November 24, 2014 by meganwilson 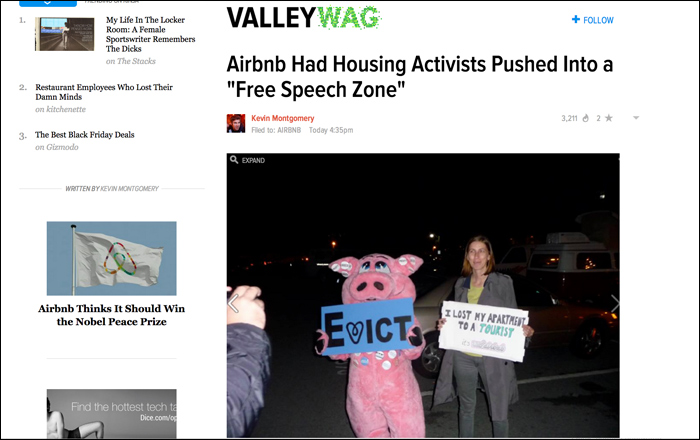 This weekend Airbnb held its first-ever conference for hosts in San Francisco. Inside, executivesrestated the company’s goal to win a Nobel Peace Prize. Outside, local cops allegedly shoved housing activists who were protesting Airbnb’s role in the eviction crisis, confining demonstrators into a “free speech” pen.  …. Read more HERE 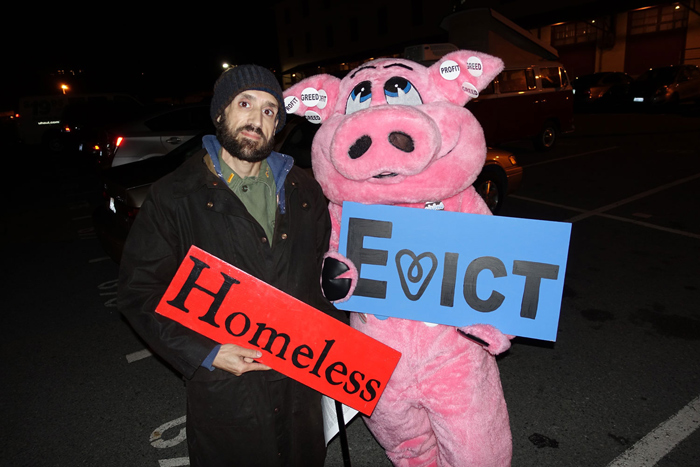 San Francisco’s Tenderloin district has the highest concentration of homeless persons (44%), comprises the highest proportion of residents living in poverty (69.7%) with a per capita income of $14,556 compared to San Francisco’s average of $73,802, and of the population 16 years and older, 47% are unemployed.

Megan Wilson and Christopher Statton have reached out to three of the new innovative businesses – Twitter, Zendesk, and Yammer – that are part of the Central Market CBA and who have voiced that they want to work with organizations in the community that are addressing the struggles of homelessness – to ask them to participate in our project Better Homes & Gardens Today. They are working with three organizations – two in the Central Market/Tenderloin area – the Gubbio Project and Coalition On Homelessness, as well as At The Crossroads Street Youth Support that serves homeless youth throughout SF – to help raise awareness and educate around the realities of homelessness, while helping to raise money to support these critical organizations. So far we’ve heard nothing back … we’ll keep trying. 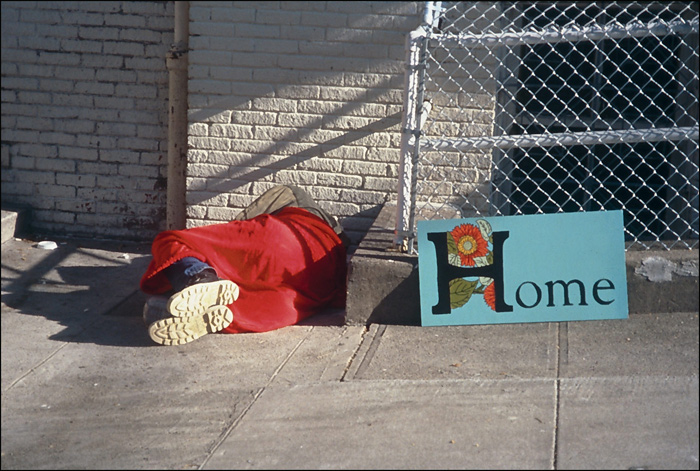 In October 2014, artists Christopher Statton and Megan Wilson will present the window instillation and public project Better Homes & Gardens Today at ATA (Artists’ Television Access). The November location for the project is TBA. For Home Statton and Wilson will be partnering with the Gubbio Project, the Coalition On Homelessness, and At The Crossroads to: 1) Heighten awareness around “home” and the realities of homelessness; 2) Cultivate a dialog within communities and amongst disparate groups; and 3) Raise money to benefit each of these critical organizations.

Statton and Wilson, will spend October painting “Home” signs in different languages in the window space of ATA. The single word for “Home” will be painted in black against a color background. Within the first letter of each sign a flower will be painted. The signs will be painted on 1⁄4″ plywood and range in size from 12″x18″ to 16″x30.”

On October 29th & 30th Wilson and Statton will host evening events at ATA for tech corporations and their employees – such as Twitter, Zendesk, Yammer, Google, and Facebook who have expressed interest in helping to made a difference to ease the suffering experienced by those living on the streets. The evenings will include presentations by the participating organizations and discussion on:

1. The realities of being homeless
2. What the culture and climate of homelessness is like in San Francisco; and
3. What is truly needed to address this crisis – funding and policy change.

Attendees will be asked to participate in the project by purchasing a set of “Home” signs. The signs will be available for $100/pair. Purchasers will get one sign for his/herself and the other sign will be donated to one of the three partner organizations to use as they see best fit. Purchasers will also be provided with more information on each of the organizations and how they can further help. All of the proceeds and the signs purchased for the organizations will be divided evenly and go to the three partners (Gubbio Project, Coalition On Homelessness, and At The Crossroads).

The Gentrification of our Livelihoods: Everything Must Go… by Megan Wilson

Posted on Wednesday, June 4, 2014 by meganwilson 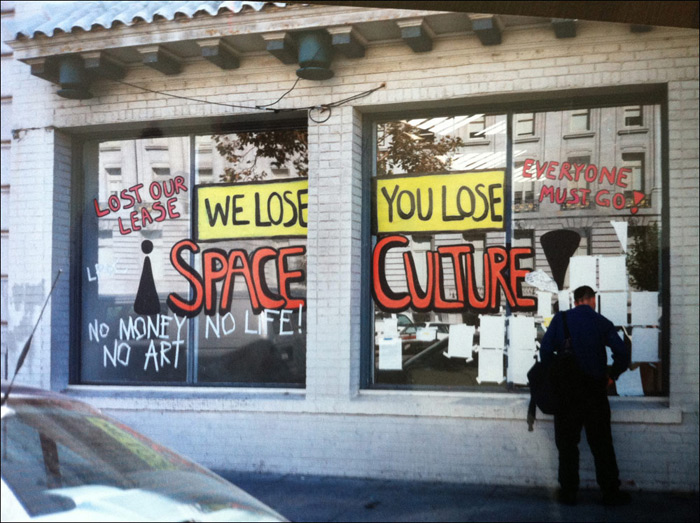 Preface: When I began researching and writing The Gentrification of our Livelihoods in early March 2014 one of my primary interests was the impact that the collaboration between Intersection for the Arts and developer Forest City’s creative placemaking 5M Project is having on the existing communities that have invested in and called the South of Market home prior to the tech booms. Having worked with many community-based organizations within the SoMa community for the past 18 years, I’ve had deep concerns about the development’s impact for the neighborhood and its impact on the future of Intersection.

However, I would not have predicted the announcement that Intersection made on May 22nd to cut its arts, education, and community engagement programs and lay off its program staff would come as soon as it did. What began as a reflection on the shortcomings of creative placemaking as a tool for economic development and its implications on gentrification and community displacement has become a cautionary tale for arts and community organizations to question and better understand the potential outcomes of working with partners whose interests are rooted in financial profit.

This Isn’t the Tech Disruption They Asked For

Tow Away the Google Bus

An anonymous addition to curb paint at a public bus stop used by google buses. 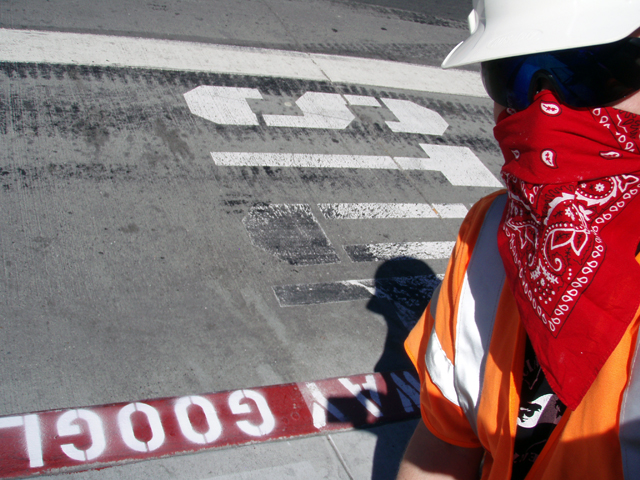 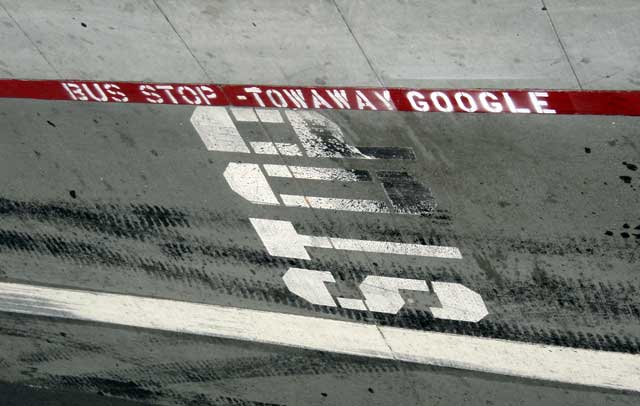 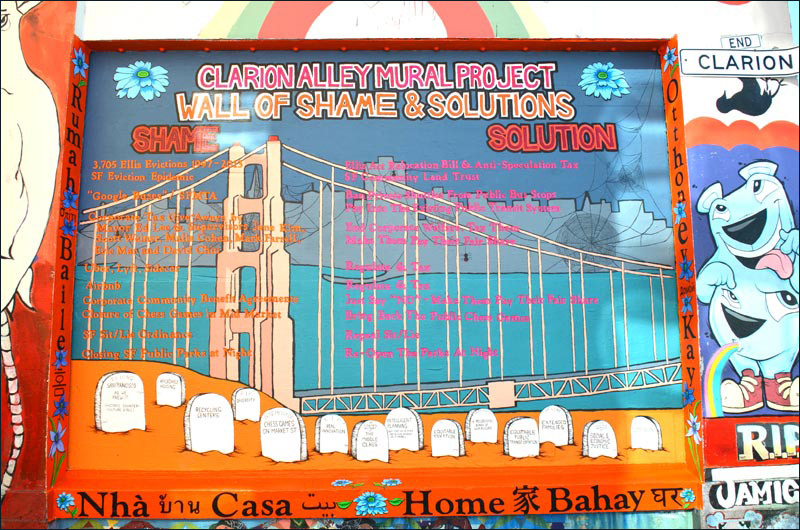 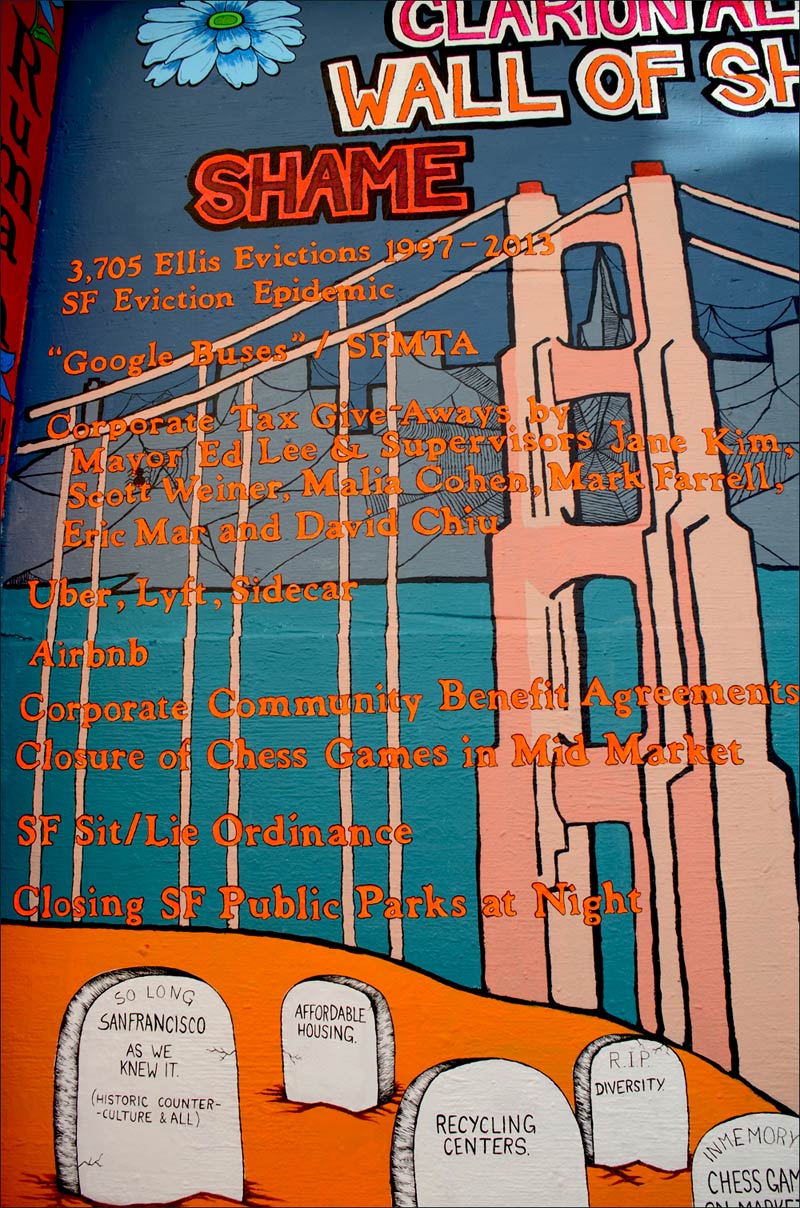 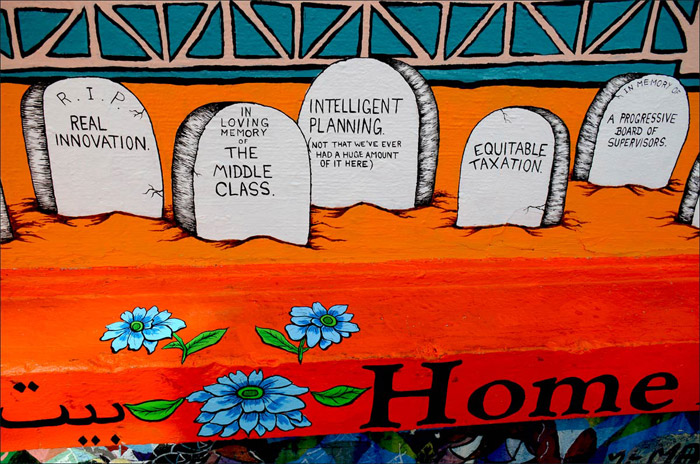 Together We Can Defeat Capitalism responds to the Google Glass controversy in Francisco with Glass War! 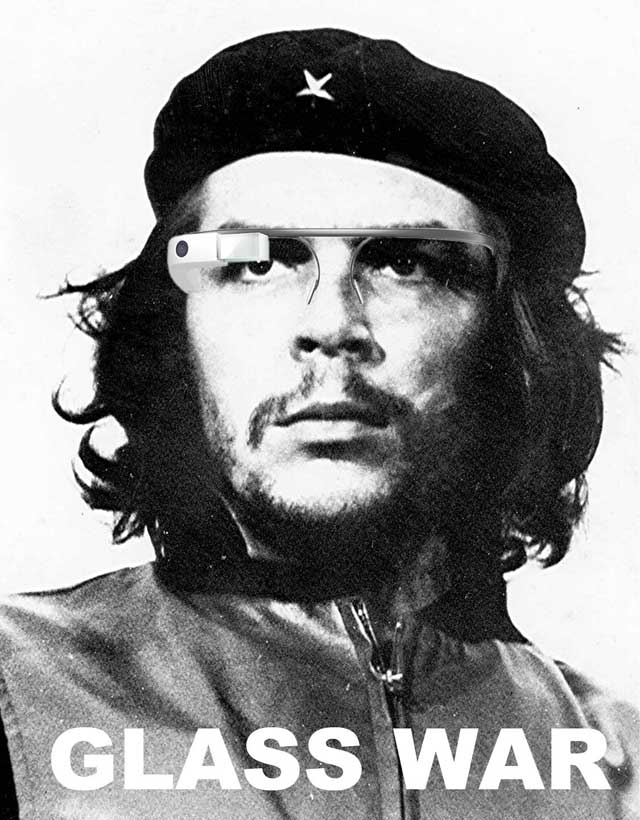